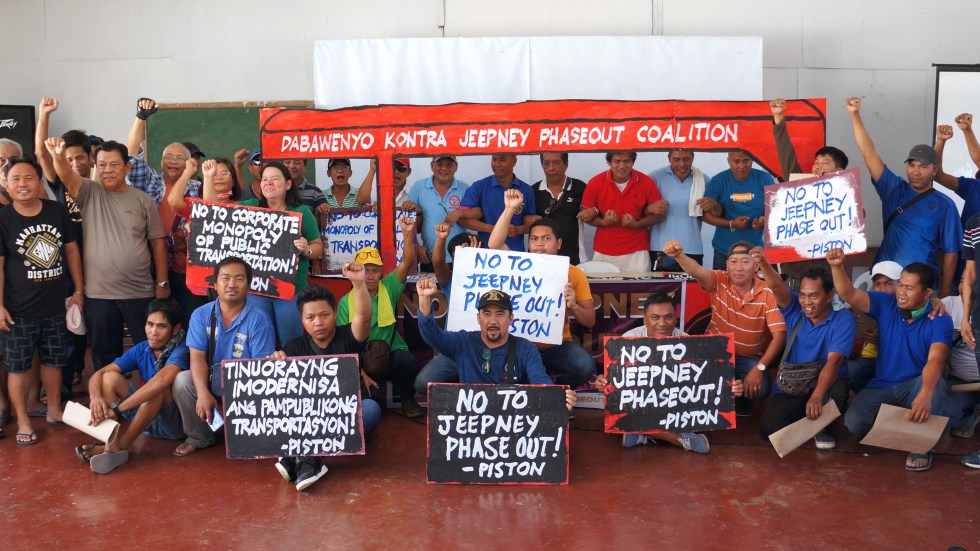 ‘NO TO JEEPNEY PHASE OUT’. Jeepney drivers and operators in Davao City, commuters, and multi-sectoral groups launch the “Dabawenyo Kontra Jeepney Phaseout” Coalition on Tuesday, February 18, 2020. The group oppose the High Priority Bus System (HPBS) of the Davao City government, which would affect the livelihood of thousands of jeepney drivers in the city. (Ken E. Cagula/davaotoday.com)

The drivers and operators said the plan will result to a total phaseout of PUJs.

During the launching of the “Dabawenyo Kontra Jeepney Phaseout” Coalition at the Iglesia Filipina Independiente compound, Davao City on Tuesday (Feb. 18), Larry Arguilles, spokesperson of Transmission-Piston Southern Mindanao Region, said that not only drivers and operators will be affected by the total phaseout of PUJs. He said commuters will also be burdened by the expected fare hike.

“We understand that our commuters are also currently facing hardships,” Arguilles said, noting that most of them are minimum wage earners. “This will be an additional expense to them every day,” he added.

The fear of losing their livelihood is shared by thousands of drivers and operators of different PUJ routes once the government will start to phase out around 7,000 jeepneys in the city for 1,000 modern buses.

“It is unfair that [the government] would remove several people from their livelihood in exchange for only a smaller number of jobs,” said one of the coalition’s convenors, Maning Duran, who’s also a former PUJ driver and is now an operator.

The National Economic and Development Authority (NEDA) Board have alreadt approved last November 2019, the P18.66-billion Davao Public Transport Modernization Project of the Department of Transportation (DOTr), which supposedly aims to “provide an efficient and affordable mode of transport for Davaoeños” through a modern High Priority Bus System (HPBS).

The project would be funded through an official development assistance (ODA).

The coalition is set to launch a petition campaign against the phasing out of PUJs, which they will lobby before the City Government, through the City Council’s Committee on Transportation.

“We hope they would act on our opposition to the government’s plan to take away the livelihood of the drivers in the city,” Arguilles said.

He added that the coalition is willing to stage a transport strike if the local government fails to listen to their grievance. (davaotoday.com)