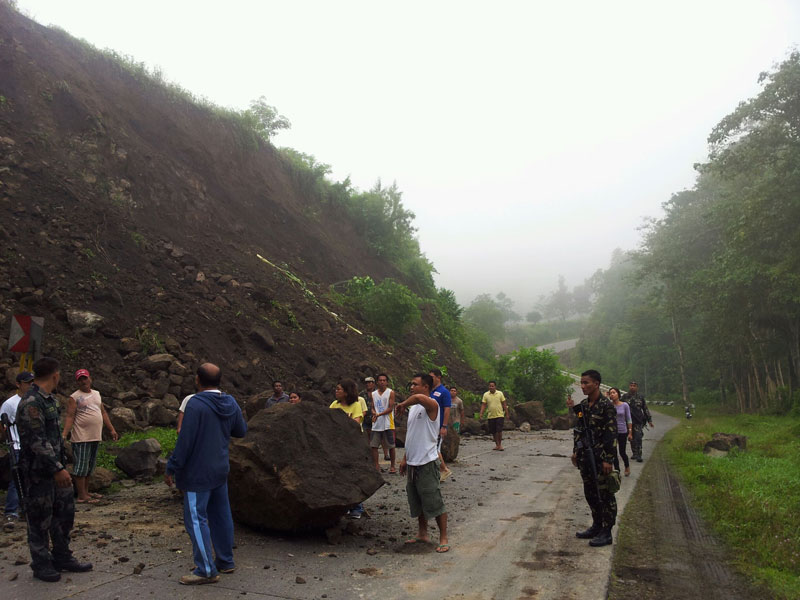 According to Jerome Barranco, Assistant Director of the Regional Disaster Risk Reduction and Management Council-Office of the Civil Defense in Region XII, 60 houses were destroyed in Kimadsil village alone.

DAVAO CITY, Philippines — In less than 24 hours, a total of 13 earthquakes struck Carmen town in North Cotabato from the 5.7 magnitude Saturday evening which hurt five people including four children, damaged 60 houses and destroyed a bridge.

The Philippine Institute of Volcanology and Seismology (Phivolcs) recorded the first quake at 10:10 PM Saturday with epicenter at 12 Kilometers (Km) Northeast of Carmen.  It has a depth of 5 Km.

But a resident of Kibudtungan village told davaotoday.com they felt numerous aftershocks, some are even as strong as last night.

“The last we felt was 10 minutes ago,” said Aynaderka Sison in a phone interview at half past noon Sunday.   “It lasted for about 10 seconds,” she added.

She wonders though why evacuation hasn’t been ordered yet.  “We don’t know what to do.  Our walls have huge cracks.  Two more strong shakes and our house will already collapse,” she worries.

According to Jerome Barranco, Assistant Director of the Regional Disaster Risk Reduction and Management Council-Office of the Civil Defense in Region XII, 60 houses were destroyed in Kimadsil village alone.

The bridge in Sitio Mutian, Kidmasil village was also destroyed.

“We’re asking the DPWH (Department of Public Works and Highways ) to prioritize the rehabilitation of the bridge,” said Governor Emmylou Taliño-Mendoza in a television interview, as she expressed worry that commuters will be greatly affected.

The bridge is along a national highway that connects Davao City and Cotabato province to Bukidnon province and Cagayan de Oro City.

The local government unit has been conducting clearing operations while DPWH personnel are still assessing damages.

Taliño-Mendoza said the situation is still under control.