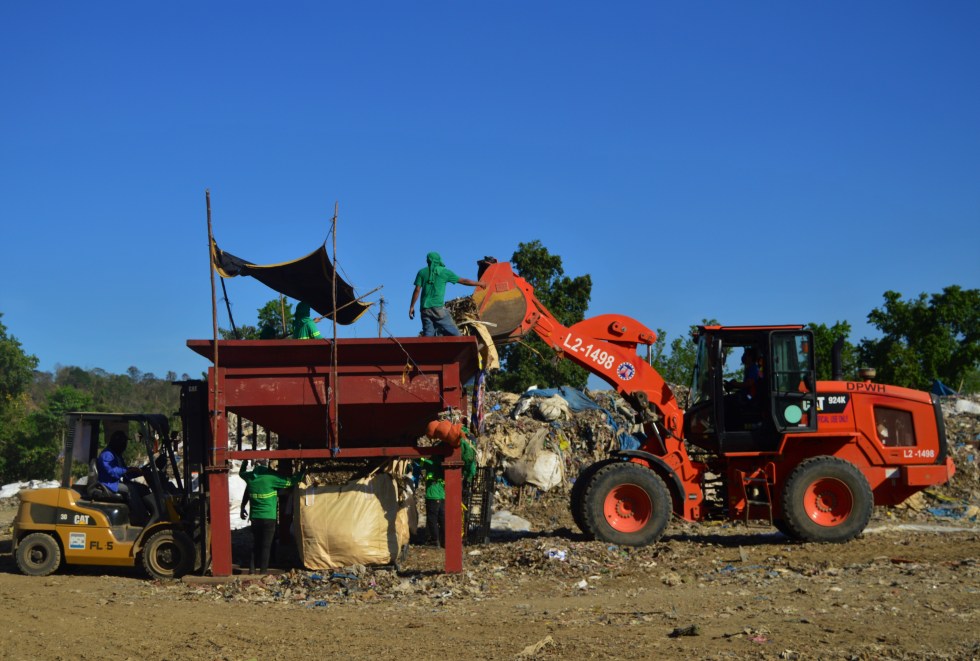 A payloader unloads a pile of South Korean trash into a steel funnel before a tonner bag catches it at Sitio Buguac, Brgy. Sta. Cruz, Tagoloan, Misamis Oriental, Tuesday (March 3). The Bureau of Customs said there are at least 2,000 metric tons of imported wastes that have yet to be reshipped to its country of origin as the coronavirus disease delayed the transportation. (Jigger J. Jerusalem/davaotoday.com)

CAGAYAN DE ORO CITY, Philippines — As the last batch of imported trash is expected to be transported back to its country of origin, an official of the regional Bureau of Customs (BOC-10) revealed they are planning to file a complaint against the South Korean government before an international body for the alleged damage that the waste inflicted to the environment.

John Simon, BOC-10 district collector, said his office will coordinate with the Department of Environment and Natural Resources (DENR) and other groups to determine if the garbage from South Korea had an effect on the land where imported wastes are stored inside the Phividec Industrial Estate facility Sitio Buguac, Barangay Sta. Cruz, Tagoloan town, Misamis Oriental since 2018.

“We’ll come up with a thorough examination of the damage made on our environment, and once that is done, we will file a complaint against them [South Korean government], probably before the United Nations [UN],” Simon said in an interview Tuesday.

The BOC official said they will elevate the complaint and “will not stop until the culprits are punished and have been made to pay the penalties for what they have done.”

Simon said it is the responsibility of the foreign government — where the trash has originated — to pay for the damages that might have resulted from the exportation of wastes.

He said three officials of Verde Soko are facing charges for violation of Republic Act 6969 or the Toxic Substances and Hazardous and Nuclear Waste Control Act of 1990, and Republic Act 10863 or the Customs Modernization and Tariff Act. They are South Korean nationals Cho Chul-soo (also known as Charles Cho), Cho Jae-ryang, and Na Sena.

The cases were filed before the Misamis Provincial prosecutor’s office in June last year.

Aileen Lucero, national coordinator of EcoWaste Coalition, said environmental complaint must be elevated to the UN as the “site had been contaminated,” adding that a legal remedy must be initiated with the South Korean government as respondent.

South Korea has a liability to face, she noted, since there are damages and exposure. It “must reverse the contamination,” she said.

About 6,500 metric tons of plastic wastes were imported by Verde Soko Philippines Industrial Corp. to be used as materials for its recycling plant in Sta. Cruz in 2018.

According to Simon, about 2,000 metric tons have remained after most of the trash was shipped back to South Korea in 2019 and early this year. The re-bagging of the remaining garbage, he shared, is ongoing at Sta. Cruz.

Once all the waste materials are loaded into the container vans, Simon said they will contact the cargo ship that will transport the remaining garbage to South Korea.

“The ship will come as soon as the garbage are all loaded into the containers and the South Korean government had agreed to foot the bill of the said shipment,” he said. (davaotoday.com)