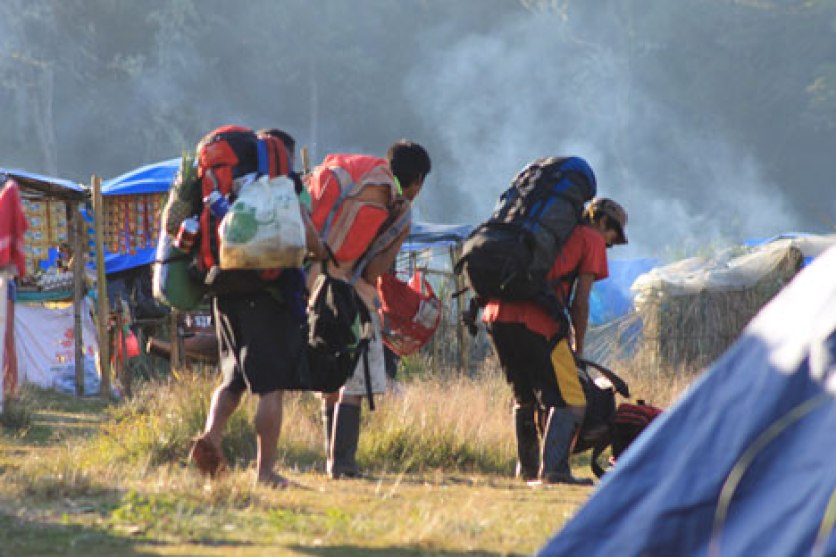 GEARING UP. This photo of a group of porters was taken in 2009 in Lake Venado. (davaotoday.com file photo by Rawi June Amaga-Morandante)

DAVAO CITY — The Central 911 here has been ordered to respond to the massive fire in Mt. Apo that has reportedly affected more than 100 hectares of forest cover.

The forest fire in the country’s highest peak broke out at the Campsite 3 at around 1:00 pm on Saturday, March 26.

In a statement on Monday, March 28. Peter Laviña, spokesperson for Davao City Mayor Rodrigo Duterte said the mayor has ordered the Central 911 to assist in quelling the fire in Mt. Apo.

The statement also cited North Cotabato tourism officer Joey Recimilla, who said that “the fire could penetrate the Kidapawan-Magpet-Makilala eco-triangle” if not contained.

“Mt. Apo is not only a tourist spot, and adventure for taking selfies, but mountains and volcanoes with forests help manage the effects of climate change,” he said.

“El Nino is undeniably here. We need less talk and more action to protect or enhance nature around us, since our survival depends on it, especially the rural poor,” Duterte added.

The Davao City Mayor’s order came after dozens of trekkers, who climbed Mt. Apo during the Holy Week, were evacuated as Makilala and Magpet Bureau of Fire Protection (BFP) personnel in North Cotabato have been trying to fight the forest fire.

PENRO’s statement said: “It was believed that fires can break out accidentally because of the accumulated garbage that can cause fires, cigarette butts thrown indiscriminately or during cooking of campers.”

Last February 2016, the Eco-Tourism Committee of the Mt. Apo Natural Park-Protected Area and Management Board (MANP-PAMB) decided to limit trekking to Mt. Apo Natural Park during this year’s Holy Week to prevent forest fires from breaking out. The number of trekkers allowed was limited to 1,000 climbers, including: 300 in Sta. Cruz; Digos City-200; Bansalan-100; Makilala-100; Kidapwan-200; and Magpet-100. (davaotoday.com)