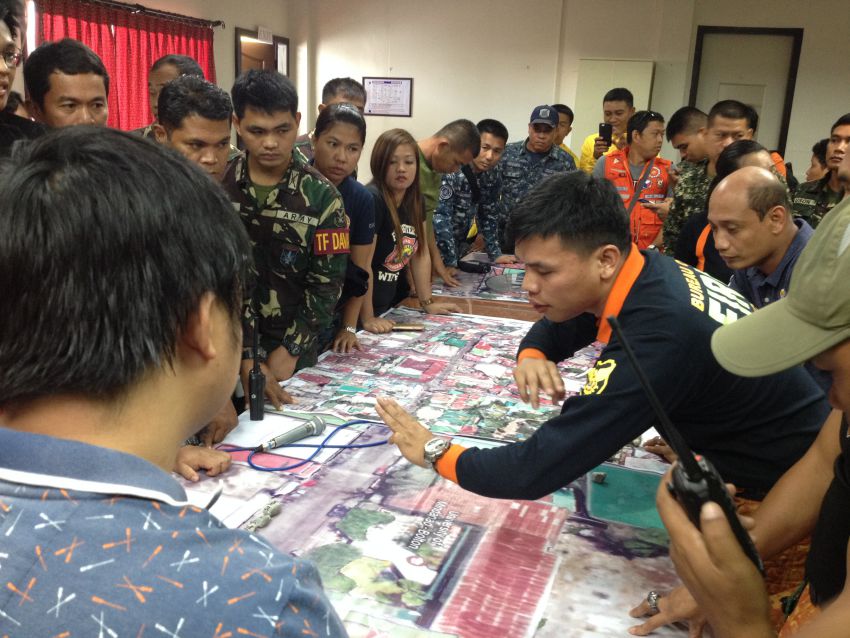 Responders from the different rescue units in the city gather in a room at the University of Mindanao Bolton campus as final instructions are given to them prior to the earthquake drill rehearsal. The rehearsal done Saturday, June 24, is part of the city’s preparation for the National Simultaneous Earthquake Drill (NSED) to be held next week, June 29.(Robby Joy D. Salveron/davaotoday.com)

The rehearsal was done to prepare the responders and the public in the upcoming NSED on June 29, said Civil Defense XI Regional Director, Leoncio A. Cirunay, Jr.

“The purpose of the drills is to instill to the public’s subconscious mind what to do when earthquakes occur through practice. So when they experience actual earthquakes, automatically, they would know what to do,” Cirunay told reporters in an interview at the University of Mindanao campus in Bolton Street.

Establishments in Bolton Street, including UM will serve as the pilot area of the second quarter NSED.

Cirunay said that Bolton Street is chosen as the pilot area because it is in the center of the city where different rescue operations drill can be performed.

He added that when the said street is closed during the actual drill, traffic congestion will somehow be mitigated unlike other areas such as San Pedro.

Cirunay said that NSED will be composed of different and simultaneous respond and rescue scenarios such as 60-second earthquake drill proper wherein everyone must perform “duck, cover, hold,” an airlift rescue, mass casualty incident, high angle rescue to be performed at the UM Building and others.

Around 500 rescue and response personnel will be participating the nationwide drill while 24 regional government agencies are also participating.

Sales said that the drill will test the participants’ readiness in responding to several rescue operations including treating injuries, reviving unconscious victims, and rescuing trapped people in collapsed buildings, among others.

Cirunay said that they are confident that the responding units will be able to perform the operations properly because the city’s highly-skilled responders.

“If we talk about preparedness, based on our record, the city has been hailed as champion of the Gawad Kalasag this year. That indicates that we are prepared because our responders are highly-skilled,” Cirunay said.