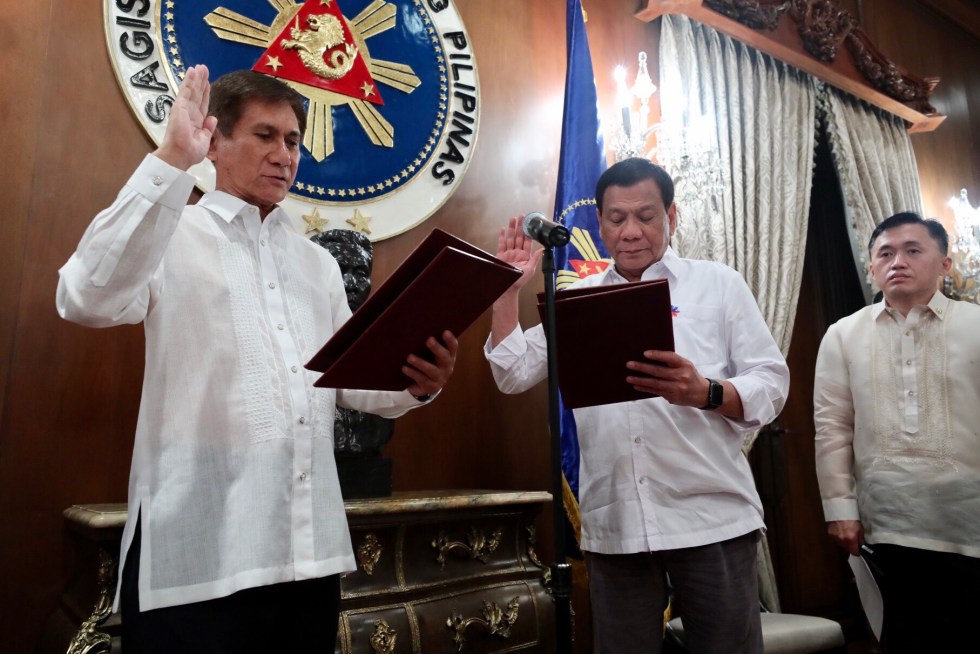 In this file photo taken on May 7, 2017, President Rodrigo Duterte administered the oath of office for the newly-appointed Environment and Natural Resources Secretary Roy Cimatu at the State Dining Room of Malacañan Palace. (Richard Madelo/Presidential photo)

DAVAO CITY, Philippines — The speedy confirmation of Roy Cimatu as the secretary of the Department of Environment and Natural Resources (DENR) only confirms that he is “the right man for big business plunderers and polluters,” an environmental group said.

Clemente Bautista, national coordinator of the Kalikasan People’s Network for the Environment (Kalikasan PNE), in a press statement, criticized the members of the Commission on Appointments (CA) for not questioning his track record of “corruption and human rights violation” of which he labeled such as “a case of shared values.”

Bautista also scored the mining industry lobbyists who questioned former DENR secretary Gina Lopez’s “lack of technical proficiency” but now did not even raise a hoot about Cimatu’s complete lack of credentials in environmental science.

“Being a hypocrite is apparently not a problem when your lobby money is already making a hefty return on investment,” Bautista said.

He perceived Cimatu’s speedy confirmation as “the biggest and clearest stamp of approval the Duterte ​administration can give to him.”

He further said the administration ​”​consequently approves of Cimatu’s reversal of Lopez’s stringent regulation on land reclamation, much to the disappointment of poor fisherfolk, coastal communities, and biodiversity conservationists​.”

“Duterte regime’s official policy on mining is to eat all its rhetoric on cracking down on irresponsible large-scale miners. It is a go-signal for Cimatu to continue his review process to reverse the closure, suspension, and agreement cancellation orders against mining projects found to have violated various environmental and socio-economic standards,” he added.