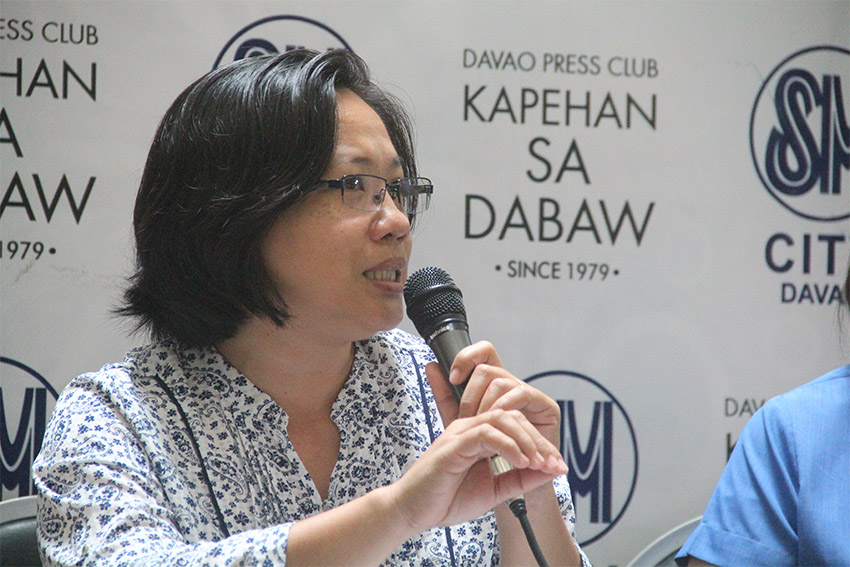 DAVAO CITY, Philippines – A local environmental group here expressed support for Department of Environment and Natural Resources Secretary-designate Regina Paz Lopez after her appointment was bypassed by the Commission on Appointment.

In a press conference here on Monday, Chinkie Peliño-Golle, acting executive director of Interface Development Interventions, said it was the “first time” that a DENR secretary has envisioned  “to develop local communities in non-destructive ways while preserving social and climate justice.”

Peliño-Golle said that through the years, IDIS as an environmental group, was critical of the DENR for failing to address environmental issues such as large-scale mining.

“We are really hoping and trying to do our best to help her appointment [ be confirmed] because if she is bypassed one more time she cannot be [reappointed]. Hopefully on her third hearing on the Committee on Appointment, she will finally be confirmed,”  Peliño-Golle said.

Peliño-Golle said IDIS helped launch a rally on March 1 titled “Kumpirma: Peoples Confirmation of Sec Gina Lopez” in front of the Ateneo de Davao University and by continually engaging through lobbying the members of the Committee on Appointment.

Peliño-Golle also said she supported Lopez’ idea for ecotourism which would boost the local economy while preserving the environment.

‘You gain income at the same time you preserve the environment, and then the income goes to the residents. Because if you say mining, you extract the minerals, export them and when [the product] goes back to the Philippines we have to buy them expensively,” Peliño-Golle said.

Meanwhile, President Rodrigo Duterte has expressed his support for Lopez, saying he is willing to lose P 70 billion in taxes to preserve the environment.

Lopez faced strong opposition from the mining industry after ordering the suspension of mining permits of 28 mining companies as DENR Secretary.

Lopez’s confirmation is currently facing 23 sworn oppositions. Lopez is also facing complaints of graft and breach of conduct filed by the Chamber of Mines in the Ombudsman. (davaotoday.com)

Read related story: Gina Lopez: The people are with me