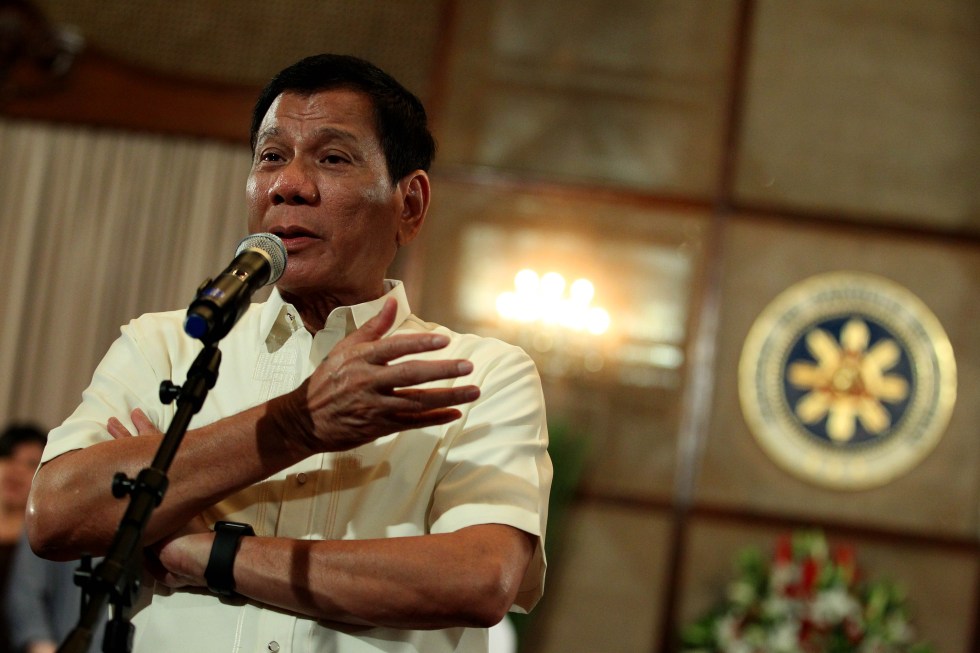 President Rodrigo R. Duterte answers queries from members of the media after administering the oath of office for the newly-appointed undersecretaries of different government agencies at the Rizal Hall of the Malacañan Palace on August 1, 2016. ACE MORANDANTE/PPD

The summit dubbed, “Oya Mindanaw! State of the Mindanao Environment Day” will also be attended by Environment and Natural Resources Secretary Gina Lopez.

The event  will highlight the issues and concerns of the Mindanaoans on the current state of the environment.

The program includes the turnover of a Mindanao Environment Agenda of civil society organizations from Mindanao to the DENR.

Among the issues that is expected to be part of the discussion is the large scale mining that has caused negative effects and irreversible damage to the environment.

In a press briefing on Monday, Duterte reiterated his stand against the companies who do not comply with the government’s standards for environmental protection.

Duterte said that he can forego with the P40 billion the government collects from mining companies yearly.

“You only give me P40 billion, lahat kayo each year, I can do away with the 14, sarahan ko kayo lahat (I will shut down your operations),” said Duterte.

He also defended Lopez from those who criticize her. The other time he came to the defense of Lopez was during his first State of the Nation Address on July 25.

“She’s not incompetent. She’s a bright lady. And she is simply a crusader,” the President said.

He also said that the Philippines can survive without the mining companies and even said that he will use the military and the police to close them.

“Either you follow strictly government standards or you close up. Pag ayaw nilang sumunod ipapasok ko kayo sa butas, takpan ko kayo kasali (If you will not follow the government I will place inside the holes you dig and cover you). You want to try it? Fine, let’s do it,” he said.

“We commend his pro-environment and pro-people positions on environmental issues, while at the same time urge him to rethink and reconsider some of his policies that have adverse implications for the environment,” the group said.

Kalikasan said the President’s pronouncement that his administration will review all existing permits “not just of mining, but also of logging and other environmentally sensitive projects,” must be anchored on the interest of the communities that has been affected by the negative impacts of the damage to the environment brought by the operations.

“It should comprehensively assess the various companies’ track records in complying with the highest environmental standards,” the group said in a statement on Sunday, July 28.

Kalikasan also urged the DENR to conduct genuine consultations and dialogues with the grassroots communities “and make them partners of this comprehensive review.”

“Any company assessed with a concrete track record of environmental destruction, community displacement, and human rights violation should immediately have their permits revoked and their operations closed down,” it said.

The environmental advocates also said that the new administration should replace the Philippine Mining Act of 1995 with a “pro-people and pro-environment mining policy such as the People’s Mining Bill.”

It said that the current mining policy has allowed the liberalization of mineral resources and opened it up to foreign corporations and their local counterparts.

“A profit-driven and foreign-dominated large-scale mining industry, consequently rapidly accelerates the rapid destruction of our environment, but it contributes negligibly to our country’s employment and economy,” the group said.

During his press briefing, Duterte did mention that there are mining companies who are partnering with foreign companies and “get rich at the expense of our native land”.

“(You) destroy the soil, tapos yumayaman kayo dyan, yung iba mga oligarchs. Pa-partner partner lang kayo kung sino sinong mga foreigner and you get rich at the expense of our native land. Do not do it,” Duterte said.

He said the mining companies are making a “critical damage” to the environment. (davaotoday.com)