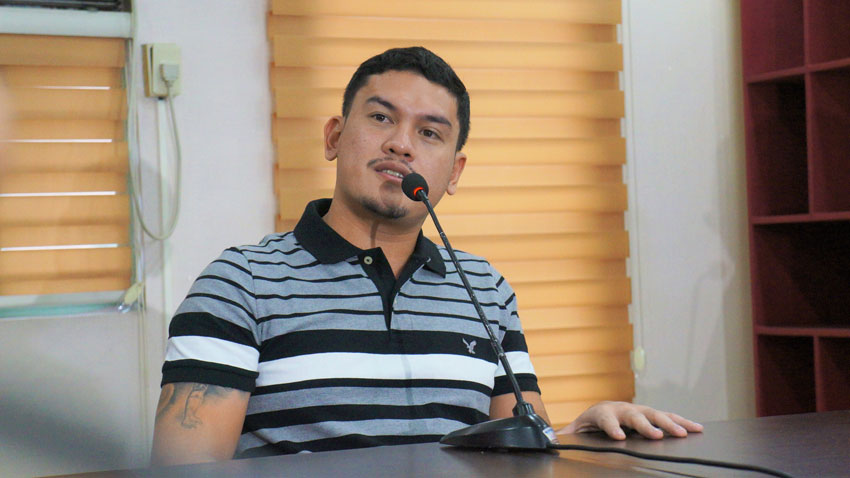 SHORT AND SIMPLE. City Vice Mayor Sebastian ” Baste” Duterte speaks to the media in his first media briefing under the 19th City Council. The young vice mayor gave short and to the point answers while asking the media to refrain from asking about national issues which have nothing to do with his duty in the City Council. (Kath M. Cortez/davaotoday.com)

DAVAO CITY, Philippines — The issue of Waste-to-Energy project and the Solid Waste Management of the City are two of many issues that environmental groups want to discuss with City Vice Mayor Sebastian “ Baste ” Duterte if given a chance.

Recently, Vice Mayor Duterte made a statement that he is willing to talk with various environmental groups of Davao City to discuss environmental matters that he thinks would be helpful in crafting legislation for the City.

“I am willing to listen to these groups that are pushing for environmental protection”, the Vice Mayor said during the first 19th Council Media Briefing.

Duterte, who is active in outdoor activities like mountain climbing and surfing, said he will balance his decision in legislation as he does not want to sacrifice either the environment and nor the City’s progress.

Interfacing Development Interventions for Sustainability (IDIS), for their part, welcomed the Vice Mayor’s openness to engage with groups like them who are active in environmental protection.

In a phone interview with IDIS, executive director Chinkie Golle said their group has already crafted the Environmental Agenda that they will submit to the City Mayor’s Office as well as to the 19th Council of the Sangguniang Panlunsod of Davao including the office of Vice Mayor Duterte.

This Environmental Agenda pushed for the prioritization and creation of the Environmental Code of Davao City, policy on banning the Single-Use Plastic, and the strict enforcement of the Solid Waste Management that Golle said would lead to the cancellation of the Waste-to-Energy Project.

Golle said that they are “very much aware that the City government favors the proposed P2.5 Billion WTE facility” but they want to try to present the Environment Agenda especially since there are new members of the council.

Another environmental group, Panalipdan Mindanao, also welcomed the Vice Mayor’s statement saying this will be a good chance to engage with the leaders in aid of their effort to craft possible pro-environment legislation.

Panalipdan spokesperson Prof. Kim Gargar said that in past local administrations, environmental groups were not heard when they registered their concerns on various environmental issues such as the operation of Coal-Fired Power Plant in Binugao Toril and the massive conversion of land from agricultural to subdivision and business processing.

“In the past, they let the Coal-Fired Power Plant operate despite our opposition. There should be some lessons learned,” said Gargar. (davaotoday.com)