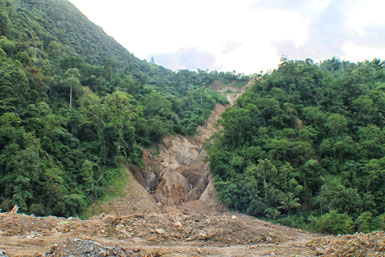 The landslide in this part of Masara mountains in Maco town, Compostela Valley in 2013, according to locals, was caused by the continuous excavation of Apex Mining Corporation, a foreign large-scale mining firm. (Ace R. Morandante/davaotoday.com )

DAVAO CITY, Philippines–Philippine President Rodrigo Duterte said he will resolve the mining impasse in the country, as he warned mining companies anew to shape up.

The President, in his speech, discussed the effects of irresponsible mining in the country which caused environmental degradation.

Duterte was referring to the ABS-CBN’s “Failon Ngayon” documentary entitled “Pamana ng Mina,” which was aired last July 9. The documentary showed the irreversible effects of environmental degradation left by irresponsible mining companies in the country.

During his May 9 election victory speech in this city, Duterte admitted that he has a problem with mining companies in the country.

“I have a big problem with mining companies. They are destroying the soil of our country,” Duterte said. “The mining people must shape up. It has to stop. The spoiling of the land, the destroying of Mindanao.”

With this, Duterte is planning to have a dialogue with the rich and the poor in order to solve the issue.

“Ikaw, sige ka diyan kutkot nang kutkot. And how… It’s only five percent. Taxes? We get about 70 billion a year and that’s it,” the President said.

Lopez has shut down the operations of 23 mines and suspended five other mining firms when it failed on the agency’s internal mining audit.

Cimatu’s order overturns the DAO No. 2017-04 which is an order issued by Lopez limiting the authority to approve ECCs for environmentally critical projects and non-critical projects. (davaotoday.com)