Earthquakes in Mindanao to last for months — Phivolcs 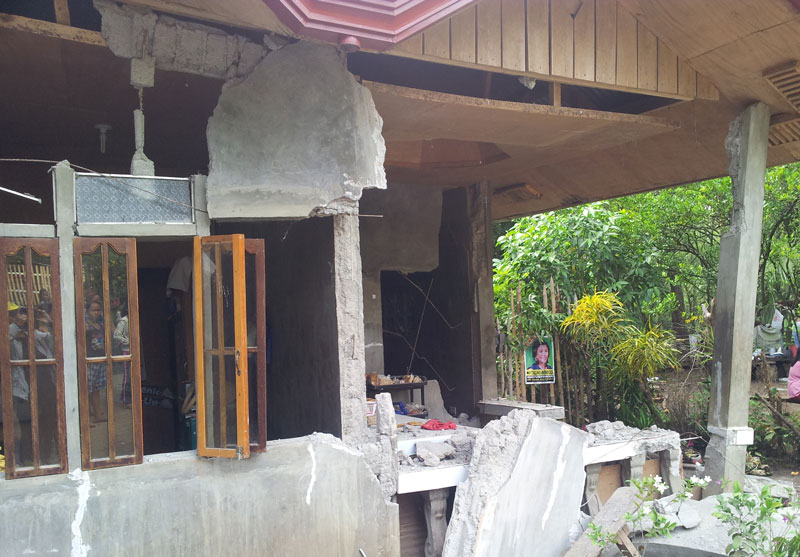 One of the houses in Carmen, North Cotabato damaged by the 5.7 magnitude earthquake Saturday. (Photo courtesy of the Office of Gov. Emmylou Taliño-Mendoza)

“Strong earthquakes which are tectonic will cause aftershocks until the energy dissipates.  In the case of Carmen which was hit by shallow quakes, the energy of the quake has little chance to dissipate when it reaches the surface.” — Jenila de Ocampo, Officer-in-charge of the Davao Seismic Station-Phivolcs

DAVAO CITY, Philippines — The earthquakes experienced today in Carmen town, North Cotabato and the rest of Mindanao will possibly last for weeks or months.

This was according to Jenila de Ocampo, Officer-in-charge of the Davao Seismic Station of the Philippine Institute of Volcanology and Seismology (Phivolcs), in a phone interview.  She added the intensity might either be “felt” or “unfelt” by humans.

A 5.7 magnitude was felt at 4:08 AM with epicenter at seven Kilometers (Km) Northeast of the town.  It has a depth of 10 Km.  The town was placed under Intensity VI.

“An Intensity VI in the PEIS (Phivolcs Earthquake Intensity Scale) means there will be a minimal damage to poorly built structures, or those with light materials and even concrete structures which do not meet building standards like the proper placement of steel bars,” De Ocampo explained.

At 7:31 AM, another quake jolted Carmen town.  A 4.0 magnitude was recorded with epicenter at 7 Km Northeast of the town.  It has a depth of 3 Km.

On Saturday evening, a 5.7 magnitude earthquake rocked the town which hurt 5 people, damaged 60 houses in Kimadsil village alone, and destroyed a bridge as well as agricultural facilities, school buildings and health centers.

The said quake, according to De Ocampo, “is shallow and tectonic in origin.” Its depth was at 5 Km.

“Strong earthquakes which are tectonic will cause aftershocks until the energy dissipates.  In the case of Carmen which was hit by shallow quakes, the energy of the quake has little chance to dissipate when it reaches the surface,” she said.

As of Sunday afternoon, 80 aftershocks have been recorded by Phivolcs.  It was expected, De Ocampo said, but many were not felt even if it showed on their records.

With the continuous tremors, affected residents wonder why no evacuation has been ordered.

De Ocampo said the decision rests on the hands of the Regional Disaster Risk Reduction and Management Council and the local government unit.

“We just help them (by giving our recommendations).  Last Sunday, we have personnel from Phivolcs in Kidapawan City who assisted them,” De Ocampo said.

Meanwhile, De Ocampo belied claims of some residents that a new volcano was discovered in Kibudtungan village in Carmen town.

Ayna Sison, a resident in the area, said Phivolcs personnel allegedly told her grandfather of a “newly found” volcano located near the site where he lives.  The volcano was said to be “inverted.”

“My grandfather said he heard a whistling sound like gas exiting from a chamber.  When the sound stopped, he said, the earthquakes happened,” recounted Sison.

But De Ocampo said “(T)here is no such thing.  But, the area though is still within the Mt. Apo complex,” she said.

Phivolcs data noted there is no active fault line in the region.

But Joel Peeters, a Belgian who has lived in Davao City and has been checking the earthquakes in the country using European-Mediterranean Seismological Centre and US Geological Survey data listing, expressed that the series of quakes could “indicate that an inactive (volcano) is activating again, or forming, or that underground something is brewing.”

Albeit not an expert but just an observer on this matter, he said, he believes that it’s “not usual” for a number of earthquakes, especially strong ones, to happen in an area not far from a sleeping volcano, which is the Mt. Apo.

“Maybe the Phivolcs could check if the sleeping giant is showing signs of waking up?,” he urged.  (John Rizle L. Saligumba/davaotoday.com)