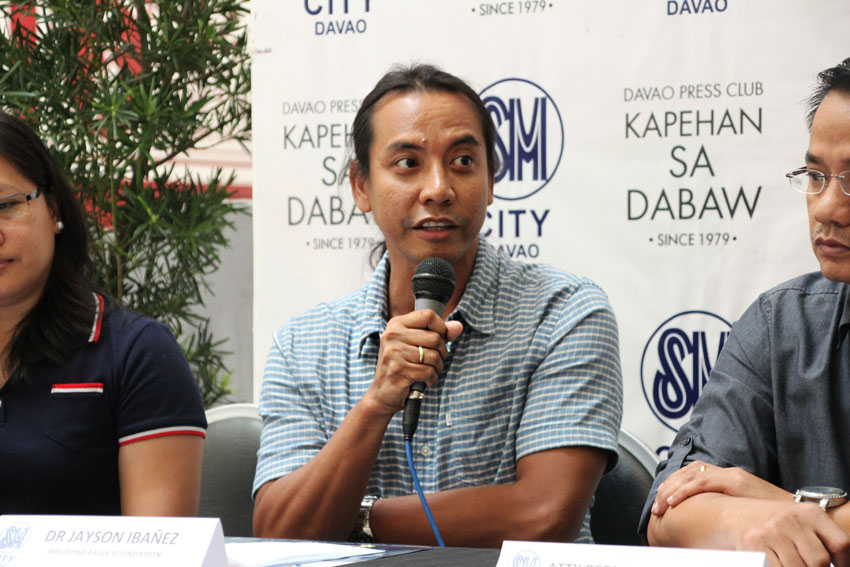 “We have places in Mt. Apo that are becoming open access because there are no clear owners and guardians. Barangay Carmen of Baguio District, for example, was formerly occupied by indigenous peoples, who were displaced to the lowlands because of insurgency issues,” said Dr. Jayson Ibañez, PEF Research and Conservation director.

He said the area became vulnerable to “encroachers from Kidapawan,” because the traditional landowners disappeared. The private landowners are engaged in illegal selling of lands, said Ibañez.

“The eagles are like the Lumad. They’re very dependent on the forests. At the same time, they’re threatened by development. Their ancestral domains are continuously threatened by commercial plantations, and illegal purchases of lands,” Ibañez said.

He said the remaining forests in Mt. Apo are inside the ancestral domains of four indigenous groups, namely the Bagobo Tagabawa, Klata Bagobo, Obo Manobo, and the Manobo Tinananon.

Part of the foundation’s efforts towards this goal, Ibañez says, is the Indigenous Forest Guard Program, where indigenous peoples are being tapped to protect the forests in exchange for support to the communities, which as been going on for 10 years now.

This support, which Ibañez refers to as “conservation incentives,”comes in the form of social services such as livelihood assistance, education and health services among others.”

Currently, there are 23 indigenous people’s villages who serve as pilot sites for the program across Mindanao.

“The important next step would be to get a TESDA accreditation for the forest guards in order to turn it into a legitimate job,” Ibañez said.

Ibañez believes that this will also lead to economic development among the communities who are rarely reached by government services.

“Forest guarding is an important job. It’s a requirement for a healthy society, but no one is doing it,” he said. However, he said that the country does not invest much to hire guards in the uplands to take care of the forest.

“We’re trying to change that by making forest guarding by the indigenous peoples as a legitimate job and pay them for doing it,” Ibañez said.