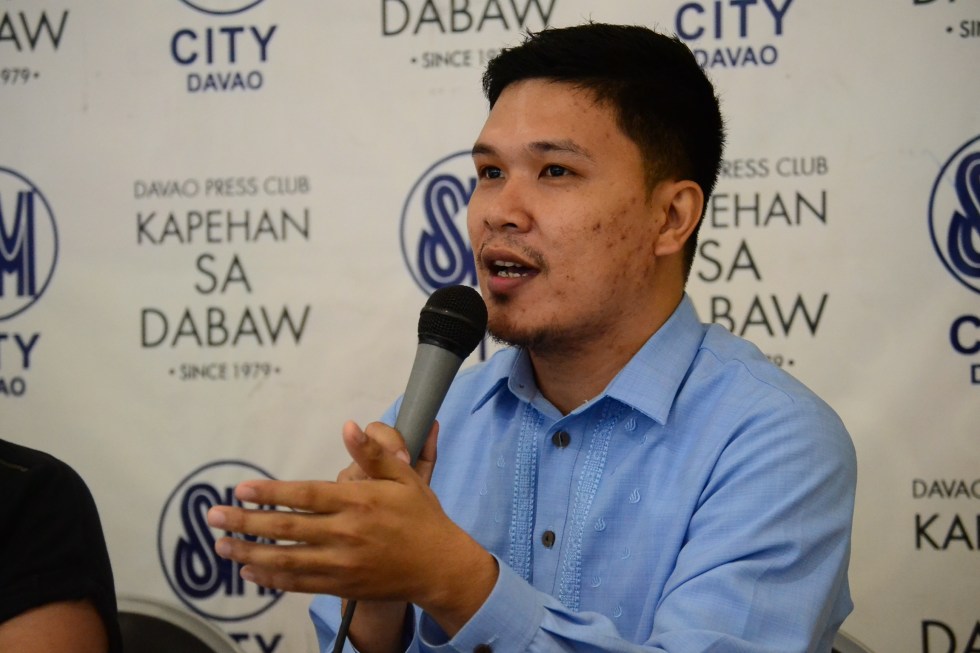 ALTERNATIVE MINING. Atty. Ian Gencianeo of Philippine Misereor Partnership inc., Davao Region Cluster (PMPI-DRC), told reporters in a press conference on Monday, June 5 that the mining industry in the country does more harm than good. He also campaigned for the passage of the Alternative Minerals Management Bill which is still pending in both houses of Congress. (Robby Joy Salveron/davaotoday.com)

In time with the commemoration of the 45th year of World Environment Day, IDIS Acting Director Chinkie Peliňo-Golle said on Monday, June 5, that one of their priority campaigns is to ensure the local economy development through alternative mining as incorporated in the Alternative Minerals Management Bill (AMMB).

AMMB is House Bill 984 that was introduced in the Lower House in 2013 and the Senate Bill 43 filed by Senator Serge Osmena the following year.

Both legislative measures were filed to scrap the existing Philippine Mining Act of 1995 or the Republic Act 7942.

The two bills are still pending in both Houses until now.

As stated in the bill, ‘mineral extraction will not be allowed in areas more beneficial to other land use; priority will be given for more viable and more sustainable livelihood choices for communities, with utmost importance given to food security and livable conditions for peoples.’

She added that mining companies owned and managed by foreigners have gained so much benefit while the local communities are left without progress.

“We have mining operations currently owned by foreign companies for how many years, yet they are the only ones who benefit from it,” Peliňo-Golle said.

The bill shall also impose ‘ownership of indigenous peoples’ which means no mining activity shall be conducted within ancestral domains of IPs without their free, prior and informed consent (FPIC) that is based on their respective traditional consent processes.

“Local communities are affected socially. Imagine indigenous people in the communities living in the areas mined by big mining operators. Their livelihood, culture and local economy are really affected and they did not progress,” she said.

According to PMPI-DRC in a press release, the mining industry contributes ‘a little to none in the country’s GDP.’

Mining Industry Statistics released by the Mines and Geosciences Bureau (MGB) shows that mining contributes only 0.6 percent to GDP while only 0.5 percent is provided in terms of employment.

“In terms of the good that it gives to the people, it only does harm rather than good,” Atty. Ian Gencianeo of PMPI-DRC said.

Gencianeo said that there’s nothing responsible about mining thus they also appeal to President Rodrigo Duterte and the Department of Environment and Natural Resources (DENR) to declare a ‘mining moratorium’ to protect the remaining pristine forest left and save those which have already been damaged.

Peliňo-Golle said they are hopeful that the bill will be given attention and will be approved by the Congress and at the same time by President Duterte.

She also looked forward to DENR Secretary Roy Cimatu to be more assertive and aggressive in terms of enforcing environmental laws.

“We are expecting him to really enforce environmental laws. Here in the Philippines, many laws exist but the problem is the enforcement. If only laws were strictly imposed, we wouldn’t be to a point where environmental issues and concerns are difficult to address,” she said. (davaotoday.com)