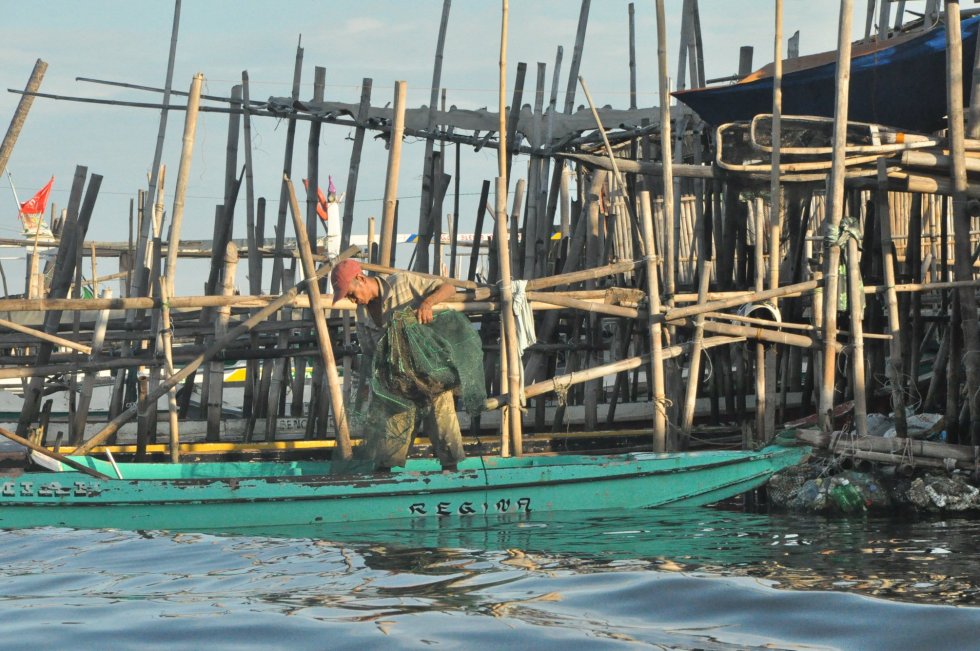 According to Kalikasan People’s Network for the Environment, fisherfolk and salt makers living among the islands of Barangay Taliptip in Bulacan are threatened by a 2,500-hectare Aerotropolis reclamation project owned by San Miguel Corporation. (Photo courtesy of Kalikasan)

DAVAO CITY, Philippines — An environmental group on Tuesday expressed alarm over the ill-effects of the massive expansion of the government’s reclamation projects.

The projects are contrary to the recent pronouncement made by Pres. Rodrigo Duterte that he does not want any reclamation in the country, the Kalikasan People’s Network for the Environment (Kalikasan PNE) said in a statement.

At least 19,000 hectares of reclamation are still underway nationwide but the group said the area could possibly expand up to 38,000 hectares.

In the statement, the group’s National Coordinator Leon Dulce said: “We need definitive action and not just another empty Cabinet banter against runaway reclamation expansion across the Philippines.”

Dulce took note of the ongoing reclamation project dubbed as the Bulacan Aerotropolis project that has already damaged a stretch of mangroves in the area.

He suspects the operations of wiping out the mangroves has no environmental clearance from concerned authorities.

“What more with the rest of at least 19,000 hectares of reclamation projects nationwide currently in the pipeline?” Dulce added.

Kalikasan PNE took part in the recent rapid appraisal undertaken by environmental scientists at the site for the 2,500-hectare Aerotropolis project in Bulacan owned by San Miguel Corporation (SMC).

The group surveyed numerous Indian mangrove trees that residents reported to have been cut down by SMC personnel almost a month ago.

The exact number of trees cut has yet to be determined, Kalikasan PNE added.

Among the findings of the survey was the overlapping of the SMC airport and metropolitan projects in barangay Taliptip, Bulacan with the 25-Ha Bulakan Mangrove Eco-park established by the Department of Environment and Natural Resources (DENR), the group pointed out.

“Taliptip’s mangroves are part of the remaining mangrove corridor in Northern Manila Bay that could potentially be listed as part of the Ramsar wetlands of international importance. Migratory birds come here to feed and breed. Thousands of families are dependent on the bay for their food, livelihood, and resiliency. With what we’re seeing here, the birds’ habitat, the people’s source of livelihood and protection from storm surges is being turned into just another concrete jungle for the profit of the very few,” said Dulce.

The group emphasized that wetlands that are part of the ‘Ramsar list’ are considered internationally significant in terms of ecology, botany, zoology, limnology, or hydrology.

“Governments acceding to the 1971 Ramsar Convention, which provides for the international conservation and promotion of the sustainable use of wetlands, are required to enact and implement measures for the protection of the wetlands found in each respective country that are among those included in the global list of important wetlands,” Kalikasan PNE added.

It also recalled that the Philippines is a signatory to the Ramsar treaty and among the country’s wetlands listed include the 14,836-hectare Agusan Marsh in Mindanao; the 14,568-hectare Naujan Lake National Park in Mindoro; and the 175-hectare Las Piñas-Parañaque Critical Habitat and Ecotourism Area (LPPCHEA).

LPPCHEA, the groups added is also being threatened by reclamation in Manila Bay.

Other coastal areas in the country that are affected by reclamation projects include that of northern Bataan, Pampanga, the rest of Metro Manila, and northern Cavite, the Kalikasa PNE said.

The group also took note of the partnership that the Duterte administration entered into earlier this year with the Dutch government to develop the Manila Bay Sustainable Development Masterplan aimed to provide an ecologically sustainable while economically viable development framework for the bay.

“Why are reclamation projects being awarded deals when the supposed masterplan that will govern it is still non-existent? Do these projects even have feasibility studies and environmental impact statements that will justify the clearing of mangroves and coast-filling already undertaken by the reclamation companies?” Dulce emphasized in the statement.

He added that a moratorium must be imposed on all reclamation projects in the pipeline so long as no scientifically-robust, environmentally-friendly, and democratically-consulted bay development plan is in place. (davaotoday.com)