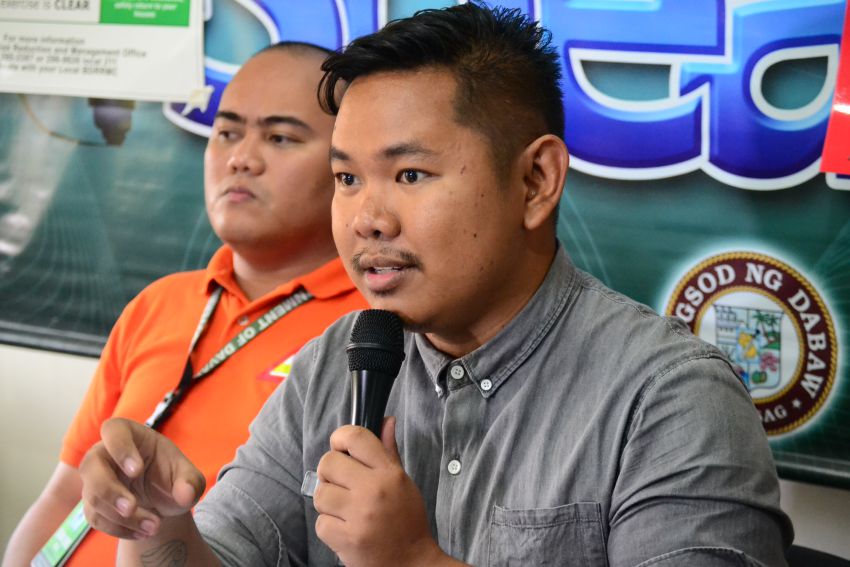 DELEGATE FUNCTIONS. Atty. Mark Penalver of Interface Development Interventions (IDIS) appeals to the National Water Regulatory Board to consider delegation of monitoring functions to the local government unit of the city. Penalver said in a press conference held at the City Hall on June 22, that by doing so, the city’s watersheds will be protected and monitored better and the NWRB’s problem on lack of manpower could also be addressed. (Robby Joy D. Salveron/davaotoday.com)

DAVAO CITY, Philippines –The Interface Development Interventions (IDIS) appealed to the National Water Regulatory Board (NWRB) to give power to ​the city government to monitor water resources.

Lawyer Mark Penalver of IDIS said in a press conference held at the City Hall on June 22, that the water resources in the city will be evaluated and monitored better if the LGU will be the ones to handle it.

“Here in Davao City, we appeal (to NWRB) that the city be given the authority to monitor, to evaluate, and to issue permits since we know the actual situation of our water resources and ground water. We are the ones to know if it is still enough,” Penalver said.

Penalver pointed that there are a number of unmonitored water extractions done in the watersheds of the city while several subdivisions don’t have permits from the NWRB.

“During our past dialogue with them, they always say that they lack the manpower to do the monitoring on the ground. At least one person is designated for the whole region 11 so it is expected that not all areas are thoroughly monitored,” Penalver said.

Penalver added that if they would just share the monitoring authority to the LGU, problems such as unmonitored watersheds and lack of manpower would somehow be addressed.

According to Section 2 of the Water Code of the Philippines, The NWRB has the authority to issue permit on instances such as appropriation of water for any purposes, amendment of an existing permit (change in nature or point of diversion, amount of appropriation, period of use, etc.), and temporary permit to appropriate and use of water.

Penalver said the city has created its own water code to include monitoring function ​but the NWRB rejected it because of the policies under the Water Code of the Philippines
​
​The NWRB has the sole authority to monitor, evaluate and issue permits regarding Davao water extractions, Penalver said.

Penalver recalled that they appealed for it since 2001 where a lot of consultations have already been made but they always get the same reply.

“Hopefully, the NWRB would join this year’s Watershed Stakeholders Summit on June 29-30 so that they can give input or update regarding the ground water situation here in the city. Hopefully they would consider to delegate or deputize the LGU to monitor and issue permits,” Penalver said.

The issue on Water Code and monitoring of watersheds is one of the top concerns to be discussed during the said 5th Watershed Stakeholders Summit wherein around 150 participants from various sectors are expected to attend.

IDIS Program Coordinator Bem Cabiza said that the summit is the last activity in celebration of the Philippine Environment Month and will serve as a venue for policy makers, implementers and water resource users to discuss different issues and as well as appropriate solutions.