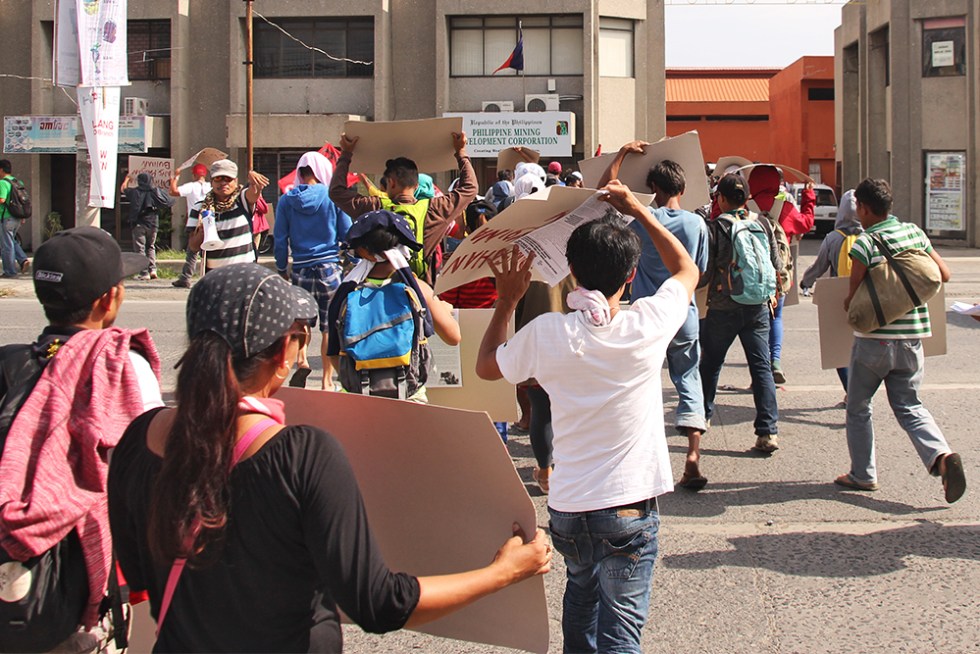 In this file photo taken last October 23, 2017, several small-scale miners from Mt. Diwata in Compostela Valley Province protested in front of the Philippine Mining Development Corporation in Lanang, Davao City. They are opposing the plan of relocating ball mill operators outside Mt. Diwata. The small scale miners say the relocation would burden them with costlier operations as they will have to transport the rocks going to the relocation site. (Medel V. Hernani / davaotoday.com)

DAVAO CITY, Philippines — An environmental group here on Thursday criticized the Philippine Mining Development Corporation for its supposed plan of selling the gold and minerals of Mt. Diwalwal to an Australian mining firm.

“It only shows that Duterte government is keen on continuing previous government’s policy of mining liberalization as embodied by the Mining Act of 1995,” Kim Gargar, spokesperson, Panalipdan Southern Mindanao, told DavaoToday in an interview.

He said PMDC’s plan exposes Mt. Diwata to large-scale mining which he feared would only result to environmental destruction.

The series of negotiations between PMDC and the Australian mining firm that Sipaco did not name have resulted to several agreements such as the paying of commitment fee and building a tunnel, among others.

The Philippine Economic Zone Authority (PEZA) has entered into an agreement with PMDC to declare the 8,100 hectares Diwalwal Mineral Reservation as a mineral processing industry zone.

If PMDC’s plan would push through, the small-scale mining community in Mt. Diwalwal will be demolished, Gargar warned.

He said more than 200 families and thousands of small-scale miners had been affected when PMDC, a government-owned and controlled corporation, ordered the relocation of small mining plants, ball mills and other mining machineries in Mt. Diwalwal as per government’s responsible mining plan.

“By opening up Diwalwal minerals to foreign plunder, only foreigners benefit while the local community suffers, as shown in many areas in the country with such experience,” he said.

“We are one with the people of Diwalwal in opposing the entry of foreign large-scale mining companies. We continue to call for the scrapping of the Mining Act of 1995,” Gargar said.

Panalipdan said the government won’t achieve a national development but an “intensification of mining plunder by foreign corporations and their local business partners as well as an intensification of environmental disaster.” (davaotoday.com)