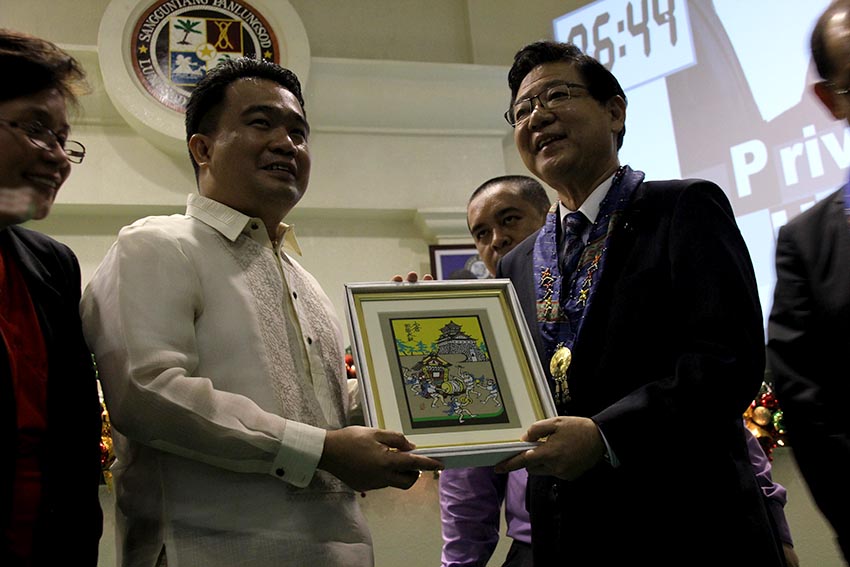 JAPANESE MAYOR. Kitahashi Kenji, mayor of Kitakyushu City in Japan presents city councilor and majority floor leader Bernard Al-ag a painting to commemorate the agreement signed between his city and the local government of Davao during the council’s regular session on Tuesday, Nov. 15. (Paulo C. Rizal/davaotoday.com)

Kitahashi presented before the city council the remarkable results of using a waste-to-energy facility in Kitakyusu City which converts 1,300 ton of waste into energy.

The cost of the project’s implementation, he said, would be discussed during the meeting with Duterte.

Davao City generated 916 tons of waste in 2015 and is expected to reach 1,053 tons in 2021. The city’s landfill sites are expected to be filled in about five to seven years, according to the city government.

Also, a University of Mindanao study found out that Davao City’s solid waste can generate up to 1372 kilocalories.

Kitahashi has expressed hope that the cooperation between the two cities would continue to become a “global green growth cities” to be emulated by the rest of the world.