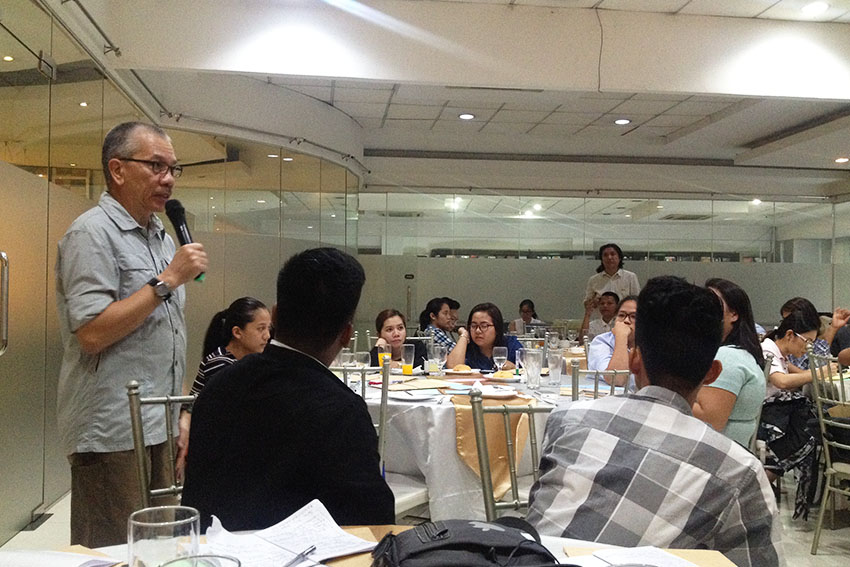 QUEZON CITY, Philippines — Journalists across the country attended a two-day training here called “Learning Event on Disaster and Emergencies” organized by The Peace and Conflict Journalism Network and Oxfam.

Ledrolen R. Manriquez, Pecojon’s project coordinator, emphasized the role of media during disasters, saying that “journalists have important role in saving the lives of the people and at the same time, in building more resilient communities.”

More than 30 journalists working in online, broadcast and print media organizations joined the training which started on Oct. 26 to Oct. 27, held at Dolce Latte Cafe in Quezon City.

CNN Correspondent David Santos shared his experience on the field when Typhoon Haiyan (local name Yolanda) flattened Tacloban in November 2013 while Chiara Zambrano of ABS-CBN gave insights on covering war as she narrated her experience covering Zamboanga Siege and skirmishes in Sulu.

On the topic Security and Safety Protocols for Journalists in Disasters and Hostile Environment, Red Batario of the International National Safety Institute said that journalists should abide at all times one of the principles of journalism and that is to maintain “independence.”

Batario pointed out that journalists covering sensitive issues should maintain their independence to avoid “conflict of interest.”

Batario also said that journalists should strive hard to get “accurate” facts. “They must report based on facts and verifiable information,” he said, noting that accuracy is the cardinal principle of journalism.

Voltaire Tupaz, head of Rappler’s citizen journalism arm MovePH, told the participants the importance of social media as a tool to ensure communication during disasters. Using technology such as various social media platforms like Facebook and Twitter, among others, could be used to crowdsourced data.

One example of such technology is Project Agos which is a “collaborative platform that combines top-down government action with bottom up civic engagement to help communities mitigate risks and deal with climate change and natural hazards.” (davaotoday.com)