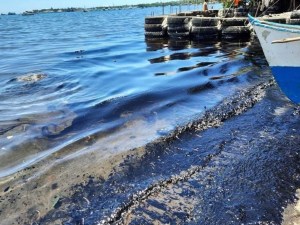 CAGAYAN DE ORO CITY – The coastal areas affected by an oil spill from a sunken cargo ship is now slowly returning to normal, a village official said on April 19.

The boat, MV Tower 1 (formerly MV Racal IV) which was inoperable and ready for scrapping, sank off near a local shipyard in the municipal waters of Jasaan town, Misamis Oriental on April 4.

The oil discharged from the cargo ship has affected the coastal barangays of Lower Jasaan, Upper Jasaan, Luz Banson, Solana and Kimaya.

As of April 19, about 88 percent of the spillage in Lower Jasaan has already been collected, said its village chairman Sabas Tagarda Jr. in a telephone interview.

“We have cleaned most of the spill after days of collecting the oil. Our volunteers were working double time just to gather the oil,” he said.

Even the oil that got trapped in the mangroves, Tagarda said, has slowly been removed by the waves.

According to the Environmental Management Bureau-10 (EMB-10)in a statement Monday, the ship’s owners, Sherwin Doctora and Dr. Lord Sanny Salvaña, agreed to spend for the cleanup efforts.

The owners, EMB-10 said, “will pay the expenses incurred in the cleanup operation along with the transport and treatment of the collected oil spill contaminated materials and debris to the TSD facility.”

But Tagarda said the owners only paid P40,000 divided among the affected villages.

He said Lower Jasaan got more than P10,000 from the payment, but added it was not enough to cover the expenses. “We spent nearly P80,000 for the food, honorarium of volunteers, and other needs,” Tagarda said.

Tagarda said the barangay council is planning to file a complaint at the EMB in the future as this has been the third time that oil spill happened since his stint.

As of this writing, the ship’s owners could not be reached for comment.

In a previous interview, Petty Officer 2nd Class Ronald Moncayo, acting chief of the Phil. Coast Guard’s Marine Environment Protection Force in Misamis Oriental, said the owners could be facing charges for allegedly violating Republic Act 9275 or the Clean Water Act due to the oil spill.

Moncayo added that prior to the sinking, a salvaging company asked permission from the PCG to pump out remaining oil and other fluids inside the boat before scrapping it.

He said the PCG did not issue the permit as the salvaging company failed to comply with the requirement of installing oil spill booms around the vessel before the pump out operation could start.

Meanwhile, the EMB-10 said the PCG and barangay volunteers have recovered 21 drums of oil and oil-contaminated materials composed of sawdust and sand, and another 21 sacks of oil-contaminated debris.

Reynaldo Digamo, EMB-10 regional director, said in the same statement that a team was sent to conduct “ambient water quality sampling” in the affected villages to assess the water quality which includes the following parameters: dissolved oxygen, oil and grease, pH and temperature.

“The EMB-10 team will release the Laboratory Analysis Results to the PCG-10, Bureau of Fisheries and Aquatic Resources 10 (BFAR-10) and Jasaan town to assist them in evaluating potential impacts of the spill and identify proper mitigating measures,” Digamo said.