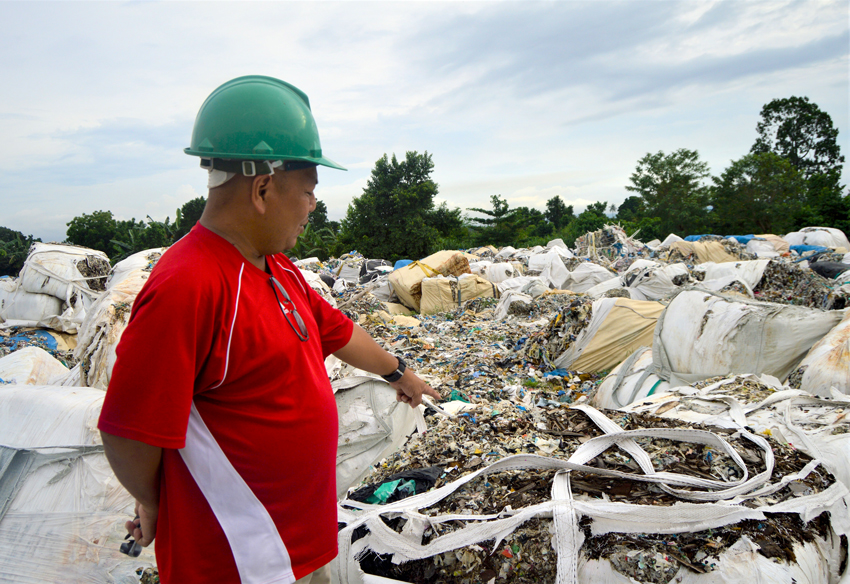 An engineer points at the pile of plastic wastes that are stored at the facility of Verde Soko Philippines Industrial Corp. inside the Phividec Industrial Estate in Barangay Santa Cruz, Tagoloan, Misamis Oriental. The 6,500 tons of plastic trash will be shipped back to South Korea after Verde Soko allegedly failed to secure an import permit and has wrongfully declared the discarded materials. (Jigger J. Jerusalem/davaotoday.com)

CAGAYAN DE ORO CITY, Philippines – After the entry here of several tons of imported discarded plastic materials sparked a national outcry, the governments of South Korean and the Philippines have decided to ship back the garbage to its country of origin.

In a statement, the EcoWaste Coalition said the Philippine and South Korean governments have agreed to return back to South Korea some 6,500 tons of “mixed wastes” that are currently stored at the facility of the Phividec Industrial Authority in Tagoloan town, Misamis Oriental.

The agreement was made following a bilateral meeting between the two governments last December in Tagoloan, attended by local and foreign officials including a four-member delegation from South Korea led by Lee Jong Min from the Ministry of Environment.

The plastic trash was imported by Verde Soko Philippines Industrial Corp. and arrived at the Mindanao International Container Terminal (MCT) in Tagoloan from Pyongtaek City, South Korea, in July and October last year.

The Verde Soko management said the plastic wastes were supposed to be used for its recycling plant in Sitio Buguac, Barangay Santa Cruz, Tagoloan, inside the Phividec Industrial Estate complex.

The finished product of the recycling facility, in the form of pellets and brisquettes, will then be exported to South Korea and China which will be made into furniture and other items.

But the shipment was put on hold by the Bureau of Customs (BOC) due to lack of import permit from the Environmental Management Bureau of the Department of Environment and Natural Resources (DENR).

MICT sub-port collector John Simon in a press conference said they have set the date for reshipment of the 51 containers of trash to South Korea on January 9.

“We expect the 51 garbage-filled containers stored at MICT to be homebound by January 9 provided that all regulatory requirements are readily available. Their expedited re-export is what BOC wants and this is what our people are yearning for,” Simon was quoted as saying.

Simon said that “arrangements will be made” to re-export the rest of the garbage sitting at the Verde Soko located within the Phividec Industrial Estate facility in Santa Cruz within this month.

Aside from the failure of the consignee, Verde Soko, to obtain an import permit for the plastic waste, Simon also alleged that the company wrongfully declared the shipment as “plastic synthetic flakes” although inspectors found plastic materials of other shapes and sizes during an inspection.

EcoWaste national coordinator Aileen Lucero said they “look ahead to the imminent return of the Korean mixed garbage shipments to their source, and to the adoption of stringent policies to prevent their recurrence, including a crackdown on the importation of plastic waste.” (davaotoday.com)