Small-scale miners in Pantukan ask, why blame us? 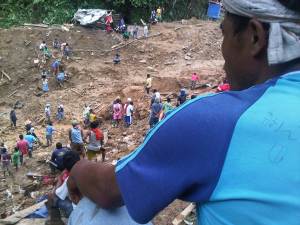 Dionesy, a former abantero who lost his two nephews in the landslide, takes a rest and watch as other volunteers dig to find more bodies still burried in the mud. (photo by John Rizle Saligumba/davaotoday.com)

Small-scale miners grapple with the impact of landslides and the government’s demolition order.

PANTUKAN, Compostela Valley, Philippines — Armed with a “no habitation policy” order, local authorities demolished mining shanties here, six days after landslides struck and killed at least 36 people on January 5.  And it was another calamity, a sort of landslide all over again for small-scale miners and abanteros, who depend in the crude gold mining as their sole source of living.

“Kami na lang man pirmi ang sala ani (We are always at fault),” complains Jun, an 18-year old abantero or mine worker of 700 (referring to 700 Tunnel Diat).  Small-scale miners have protested they are portrayed as willing victims of the tragedy.  That because they refuse to heed a government order to vacate the gold-and-copper-rush site, they chose to be in danger.

“Aside from the unusually heavy rains, small-scale mining is one of the major triggers of landslides in the Philippines,” said Mines and Geosciences Bureau (MGB) Acting-Director Leo Jasareno.

The landslide crashed down on nine houses and several ball mills along the road, totally damaging them before slowly creeping down towards the 700 Tunnel Diat where it hit the guard house and several bunkhouses owned by long time medium-scale mining firm HEXAT Mining Corporation.  The landslide rummaged 15 gold processing plants and hit the adjacent portion of Diat Dos (Purok 1 and 2) where houses and more than three retail stores were located.

Ely Sanchez, chairman of the Diat Small-Scale Mining Association (DSSMA), told Davao Today he and Purok Chairman Paciano Banuelos hold a list of residents of Puroks 1 and 2 in Diat Dos.  “We have 18 on our list.   But the actual casualties may be above 100,” he said.

Because of the tragedy, all mining activities were ordered to stop thereby putting the livelihood of more than 800 people from both Diat Uno and Diat Dos in uncertainty.  On January 11, during the demolition, some residents begged the demolition team to start with empty houses.  About 180 to 200 houses were affected with the demolition according to the Municipal Risk Reduction Management Council.  Aside from sitios Diat Uno and Diat Dos, the MGB identified other areas in Barangay Napnapan which were high-risk or landslide-prone.  These were Sitios Binaaba and Saro; Puroks Lit-ag, Boringot, Lantawan, Saro, Pulang Lupa, Puring Sayaw, Sapa, Tipga, Niliputan; and Barangay Proper’s Puroks 7, Caimito, 2 and 5.

A Hard day’s work in the Mines 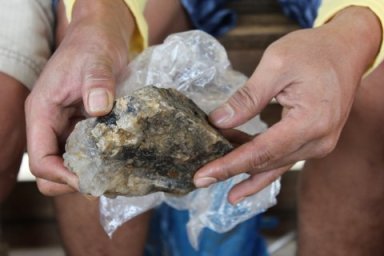 A miner holds a rock containing gold ore which he found while participating in the search and retrieval operation Pantukan last January 7. (photo by Medel V. Hernani/davaotoday.com)

The landslide — or “bardown” in mining jargon — was believed by residents to have originated from a “leaking” or fissure (a continuous, deep and huge crack in the ground) in the mountaintop of Diat Uno.
And bardown, goes with the territory, so says miners interviewed by Davao Today.

An abantero, like any other worker under dangerous conditions, risks life and limb because of the lack of tillable farmlands.   A “worker of fortune,” an abantero is always on alert for news of tunnels that are “hit” or those that have high chances of gold ore deposits.

As a former abantero who knows the danger of his trade, Olbedencia has advised his nephews who were eager to go into mining, to “sipot, unya hawa na.” (save-up and leave).  But it will never happen anymore.  Olbedencia lost two of his nephews in the recent landslide: Pablito, who has yet to be found under the mound of earth; and Jun Ray who survived but later died in the hospital.  Telen, the wife of his nephew Jun Ray, also died in the landslide.

As with other abanteros, Olbedencia became one due to dire circumstances.  He needed work to sustain his family’s needs.  He was overwhelmed by his big earnings at first, the biggest of which was receiving PhP 27,000 back in the year 2000 ($1=PhP 44).  “Wa nako kabalo asa nako to nagasto, isa lang to ka adlaw,” (I couldn’t remember where I spent the money, but I spent it in just one day),” Olbedencia said.  After his bardown experience, he decided to save and purchase a one-hectare farmland in Tagugpo, a village five hours away by foot from Diat Dos.

Now an abaca (hemp) farmer, Olbedencia said he tried to convince his nephews to farm instead of mining.  But they did not have their own lands to till.

“Dili sila kasugakod mag-uma.  Wala man problema mangabante, pero mas safety lang kung mag-uma.  Kung naay yuta.”  (They cannot withstand farming.  There is nothing wrong in being a mine worker, but farming is safer, if you have your own land to till.)

Kilusang Magbubukid ng Pilipinas spokesperson Pedro Arnado said “the absence of government support for farmers and farm workers in the countryside push many young and able young farmers to work as abanteros.”  He pointed out farms in Compostela Valley are covered with banana plantations, while rice and cornlands are not as productive in the last couple of years.  The result: swelling in the number of children from peasant families who have no lands to till and no jobs.  Mining in the gold-rich mountains of Pantukan has been an only option.

Visible along the rough mining roads in Pantukan are miners in boots, engaged in crude methods of mining: the tunnel mining and the open-cut mining.  The latter shows a miner protected with a belt hovering in the precipice while hitting the rocks.  The onslaught of semi-pulverized rocks falls over a makeshift basin where the gold ore is partially sifted.
Neophyte abanteros work as employees for mine financiers or large-scale mining companies while experienced ones co-finance mining ventures and share the income with their partners.  Abanteros only have to spend two to three hours during “hit” times, and can earn a portion of the gold at about five or 10 grams in the low-average range.  The current price of gold is pegged at more or less PhP 2,000 per gram.

Sanchez, who heads the Diat association of the miners, one of the nine mining associations in Pantukan, also started as an abantero.  He’s been in the area for 30 years.  “Being an abantero is temporary.  If you have enough money for capital, why would you choose to remain as an abantero?” he said.

In nearby Sitio (sub-village) Panganasun, where only motorcycles can pass through because of the very narrow road, big market stalls that sell meat, fish and other products are thriving.  There are also hardware stores that sell basic tools and wares and mining needs and equipment.

“I know these people.  They also started like me.  They have put-up businesses in Panganasun and Diat but are former abanteros who used their savings as capital.  They usually invest in gold-buying, ball mills or put-up their own plant,” Sanchez said.  “But there are always those who spend their money mindlessly,” he said.

Not us but large-scale miners

Danilo added the government and miners have been mum of this fact because of threats in their lives, “Mao na ang kamatuoran, ug daghan pa gyud dapat inspeksyunon sa pamaagi aning mga dagkong kompanya.  Pero dili man mosaba maski kinsa kay ipapatay man dayon.”  (That’s the truth.  There are many things to inspect in the methods of these big companies.   But no one dares to speak or they will be killed.)

Small-scale miners are responsible too

Mikel (not his real name), an abantero in the nearby Sitio Panganason, said he has heard of a proposal for a Minahang Bayan (people’s mining site) in some abanteros in Diat.  His uncle, he said, was convinced to join the Sitio Panganason Small Scale Mining Association because of the proposal.

Sanchez , who hopes for the better mining policies for the 8,000 members of DSSMA, confirmed the proposal but only hopes the government will support them.  “Dugay naman na, pero ambot kung unsa ba ang himuon sa gobyerno? (That has been the proposal for the longest time already but we don’t know what the government is planning),” he said.

He showed Davao Today a copy of his association’s 2006 notice of evacuation to residents living along dangerous zones.  “This is a proof that small-scale miners do not neglect the safety of the miners and residents.  In fact, they signed the acknowledgment receipt of the letter.”

Environmentalist group Panalipdan-Southern Mindanao, in a statement, criticized the Aquino government for prioritizing foreign large-scale mining corporations but failed to alleviate the condition of its people especially the small-scale miners and the lumads.  “The Aquino administration lacks a genuinely sustainable program for national development and has failed to uplift the plight of the people, particularly the small-scale miners and the indigenous peoples,” Francis Morales, Secretary General of Panalipdan-Southern Mindanao, said.  (with reports from Roweno Caballes/davaotoday.com)