3 Koreans charged for importation of trash 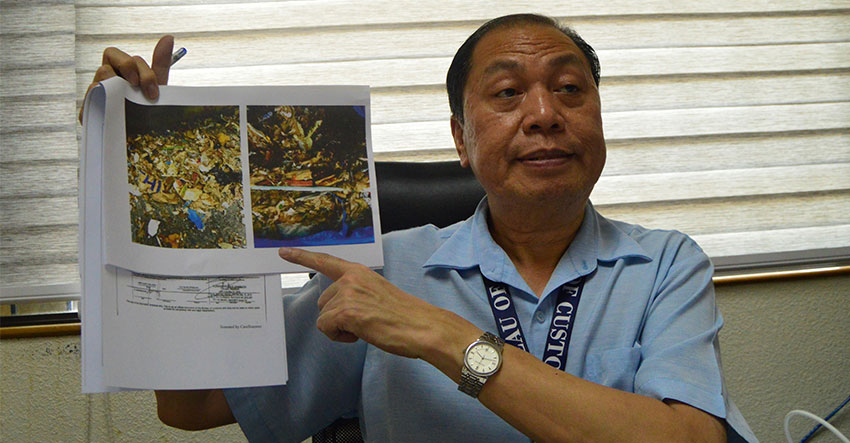 Charged before the courts are Chul Soo Cho alias Charles Cho, Jae Ryang Cho and Sena Na for violation of Republic Act 6969 or the Toxic Substances and Hazardous and Nuclear Waste Control Act of 1990, for the transport and entry of the trash to country.

The Korean nationals are officials of a firm called Verde Soko Philippines Industrial Corporation, which brought 6,500 tons of waste materials in two batches into the Mindanao Container Terminal in July and October 2018.

The company claimed the tons of imported trash were supposed to be used as materials for its plastic recycling facility in Sitio Buguac, Barangay Santa Cruz, Tagoloan, inside the Phividec Industrial Authority-managed eco-zone complex. It said some will be processed and made into furniture.

But according to BOC 10 sub-port collector John Simon, what they did was in violation of the law.

Section 13 of RA 6969 states that it is unlawful to “cause, aid or facilitate, directly or indirectly, in in the storage, importation, or bringing into Philippine territory, including its marine economic zones, even in transit, either by means of land, air or sea transportation or otherwise keeping in storage any amount of hazardous and nuclear wastes in any part of the Philippines.”

The Customs also said the garbage was not properly declared and the company failed to secure an import permit from the Department of Natural Resources.

Lawyer Abbas Lao, legal officer of the Environmental Management Bureau 10, said that the shipment of wastes arrived before they could issued Verdo Soko an import permit.

Simon said the second shipment of 1,500 metric tons was declared by the company as “synthetic plastic flakes” but was found out to be discarded and unsegregated plastic materials.

The first batch of plastic wastes was shipped back to South Korea after an agreement between the Philippine and South Korean governments last January 13.

Meanwhile, the three Korean nationals remain at large, as warrants of arrest were issued against them.

Simon said they are working with the Bureau of Immigration to issue a hold-departure order on the three. (davaotoday.com)