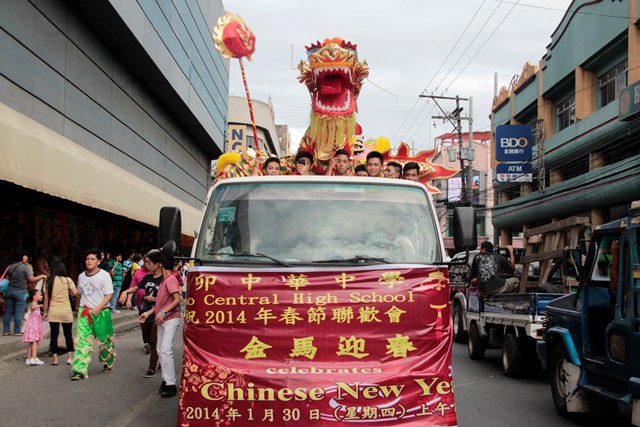 DAVAO CITY, Philippines — The traditional Chinese New Year celebration is fast approaching and preparations are already on the way, not only for the sumptuous, mouth-watering foodstuffs and programs for parties and merrymakings but also on security matters.

The twin bombings in Sulu and the grenade throwing incident in Zamboanga are still fresh in the minds of the people in Davao City, and such circumstances necessitate the implementation of tight security measures come February 5, the Chinese New Year.

The Chinese community in this premier city in the South are expecting for such stiff and rigid measures as the Chinatown Development Council (CDC) recently announced it already made representations and meetings with the Davao City Police Office (DCPO) on security matters.

In a press conference on Thursday, January 31, CDC Public Relations Officer Jasper Huang told reporters that security briefings were already done with the DCPO to ensure the security, not only of the Chinese in the city but also to all residents and expected tourists.

“We have already talked with our authorities about the security of the Chinese New Year celebration. Initially, the Davao City Police Office will assign around 300 personnel for the event,” said Huang.

The 300 personnel, he added, will be coming from the police force, the Central 911 and Task Force Davao, who will be visible in all the event areas during the celebrations.

The CDC, through another officer Steve Arquiza also expressed full confidence in the security status of the city.

“Yes, some in the Chinese community are wary of our security but generally we are confident of our security forces here that they know and they planned what to do to keep us safe,” Arquiza said.

One of the expected guests for this year’s revelry is Chinese Consul General in Davao Li Lin.

Huang said Lin has already confirmed his attendance at the celebrations.

He added that one of the highlights of this year’s celebration is the simultaneous blowing of ‘torotot’ or horns that will serve as an alternative to the traditional Chinese fireworks display.

Fireworks will also be shown visually on LED walls as part of the countdown ceremony.

“We will be giving away torotot. We’ll be preparing around 500 to a thousand torotots to given away to our audience to simultaneously blow with the drum beaters,” Huang added.

The blowing of ‘torotots’ is an alternative of the members of the Chinese community here during New year celebration in accordance to City Ordinance No. 060-02 of 2002 that prohibits the use of fireworks in the city.

Five performances will highlight the narration of the history of the Chinatown of Davao City through dancing and other methods that will make the celebration more colorful and interesting.