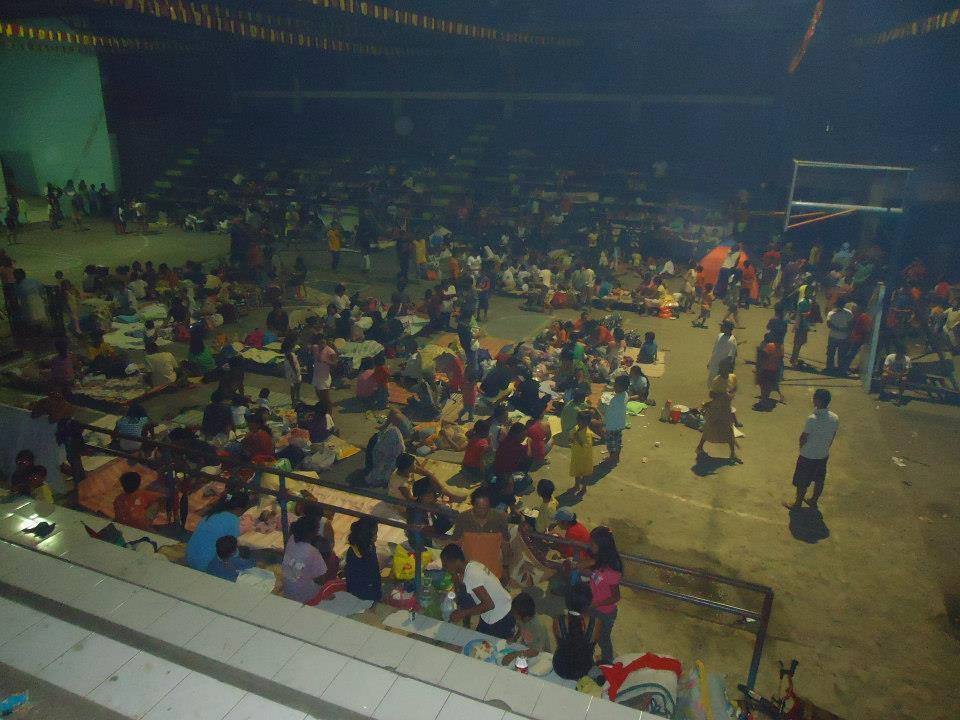 Many residents such as here in Macasandig, Cagayan de Oro evacuated early as horrors of another storm Sendong is still fresh from memory. (photo courtesy of Panday Bulig, CDO)

DAVAO CITY – About 90,000 residents of north and northeastern Mindanao evacuated to schools and gymnasium as part of preemptive measures to avoid the fury of Typhoon Yolanda shortly before it entered the Philippines through many Central Visayas islands on Friday.

In Misamis Oriental, where storm signal 1 was hoisted on Thursday night, the Rural Missionaries of the Philippines-Northern Mindanao recorded 71,563 people, or 16,513 families, who sought shelter in 223 evacuation centers.

The group added that in Cagayan de Oro City, a total of 8,627 families or 34,508 persons, have evacuated to 56 centers. The Caraga Regional Disaster Risk Reduction and Management Council (RDRRMC) reported that 5,621 families evacuated in 132 evacuation centers in five provinces, three cities and 39 municipalities.

The huge number of evacuees for a single province, in Misamis Oriental and including its city, Cagayan de Oro, was triggered by the still fresh memory of Typhoon Sendong, one of the most devastating typhoons in terms of lost lives, when it left 1,403 dead and 613,204 homeless. Sendong entered through Surigao del Norte on December 2011 and crossed the country through the northern Mindanao provinces of Misamis Oriental and Lanao del Norte.

This reputation appeared to be the single fear factor that sent many residents to voluntarily leave their houses for safer and stronger structures. Only in December 2012 that another equally a super howler, Typhoon Pablo (international code name Bopha) ravaged Davao Oriental and Compostela Valley, where 80 percent of casualties and damages to infrastructure and facilities were recorded.

The Caraga RDRRMC reported that buses plying Cagayan de Oro City and Butuan City suspended their operation by 8:30 am Friday due to flashflood in Lagonglong, Misamis Oriental and falling rocks along the national highway.

The Agusan del Norte Emergency Response Team (ADNERT) had mobilized their personnel on a 24-hour basis to monitor the level of water in the Agusan River and to ensure safety of individuals and also to provide a quick response when emergency arises.

The RDRRMC had initially distributed food packs to evaucees in Butuan, and around 5,600 food packs delivered to residents of Dinagat Island. Electricity was cut off in Dinagat Island, while Surigao del Norte sustained from power failure.

The RDRRMC reported one casualty in Barangay Poblacion in the municipality of Lingig, Surigao del Sur when an electric post fell on him. Meanwhile, the PAGASA said that Yolanda would bring stormy weather in Mindoro, Romblon, Palawan, Aklan, Capiz, Antique, Iloilo, and Guimaras. They also said Camiguin, Surigao del Norte and Dinagat province will experience rains and gusty wind with moderate to rought seas. PAGASA said Yolanda would exit the Philippine area of responsibility on Saturday morning. (davaotoday.com)