A diaspora of Yolanda survivors 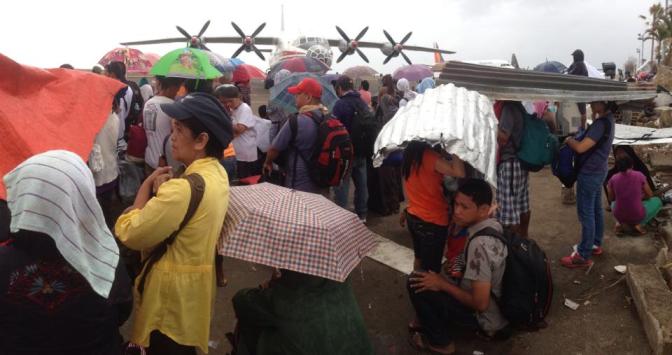 Waiting for their ride out at Tacloban City Airport. (photo courtesy of John Javellana)

DAVAO CITY – Unable to cope with their loss, some Typhoon Yolanda victims in the Visayas have found their way to making a new home here in the South.

Arriving in buses last week and in separate trips were 29 survivors from Palo, Leyte and around 40 orphaned children.

Another batch of 62 survivors, including 41 minors who are beneficiaries of Streetlight Foundation, arrived at Davao International Airport Sunday and was ferried to Samal Island to be cared by Jireh Mission Foundation, according to Alexander Balili of the relief group Balsa Mindanao.

This Monday, 27 people from Tacloban City joined the return trip of the first batch of Davao 911 personnel after the latter’s week-long retrieval and rescue operations. Ten of the survivors were minors and four were elderly.

“The migration of survivors indicate the rising problem of people having lost trust in government,” said Templa, who is also a coordinator of Balsa Mindanao.

“The movement of Yolanda survivors from Leyte to anywhere in the country indicates two things: One is government inaction as people lose trust in government. Two, is the people’s initiative to transform their own lives and redefine ways of living under extreme conditions of poverty and climate change,” she said.

She said with the slow relief efforts and lack of decisive action by the Aquino government, people have lost their patience and have thus, opted to start to rebuild on their own.

In his television program aired Sunday, the mayor said aid for the survivors here would come from the city and from donations.

Among the batch that arrived from Tacloban was Virgilio, a young father, told reporters he left the city as he began to worry of his children’s health due to the foul stench brought by decaying bodies yet to be buried.

“Baho kaayo bisan asa. Maluoy ko sa mga bata, (The stench was everywhere. I was worrying about my kids),” he said.

His wife recalled her neighbors did not survive the storm surge that wiped out their houses. Teary-eyed, she said she was glad her family was alive.

Most of these survivors had families in Davao Region and had moved with them. While the families with no relatives will stay at the city’s the Social Services and Development Office (CSSDO) shelter house, government authorities said.

The CSSDO also said they will assess the survivors and provide assistance to all survivors in their transfer here.

Meanwhile, Philippine National Police Captain Dolores Majestrado rescued 29 survivors from Palo; the police captain was there to search for her family.

Majestrado decided to bring the survivors on their way back to Davao.

According to Attorney Romeo Cabarde of the Ateneo University Community Engagement and Advocacy Council, he received observations that minimal help reached Palo, Leyte.

He said of the 29 survivors, 80 are children and minors.

Cabarde said four of these people have left for their relatives in Mawab, Compostela Valley. But some are still temporarily staying at the PNP Camp Catitipan.

He also said a concerned citizen has adopted one family.

The orphans are now undergoing psycho-social therapy by the Ateneo group.

All batches were provided food and medical checkup.

Cabarde said he expects more survivors to leave the Visayas, especially that the transit bus Bachelor Express is offering free ride for survivors.

With this development, he said officials gave assurances they will receive help.

“I talked with regional director Priscilla Razon (of Department of Social Welfare and Development) and she said they are ready to help them,” said Cabarde.

The Ateneo de Davao University and Balsa Mindanao will also hold separate relief missions in places that reportedly had minimal relief operations such as in Palo, Leyte; Samar municipalities and in Cullon, Palawan.

The government recorded 3,976 fatalities of the world’s strongest storm to date. About 1,602 are still missing, and 10 million people affected in 44 provinces and 57 cities mostly in Eastern Visayas and also Southern Luzon. (Tyrone A. Velez/ Davao Today)