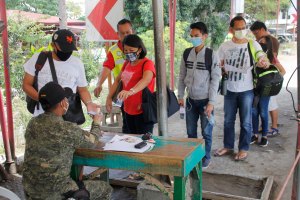 At the checkpoint in Lasang, a composite team of health workers, traffic officials, local security and Task Force Davao personnel conduct temperature checks and verification of IDs of people coming in to Davao City from the northern side of Mindanao. Those coming from Tagum City are barred from entering, as the first Covid-19 patient of Davao Region is confined in that City. (Ken E. Cagula/ davaotoday.com)

DAVAO CITY – Despite projections of a ‘mega-surge’ in Davao City during the onset of Holy Week, COVID-19 cases continue to drop as the City Health Office recorded more recoveries and less deaths in recent weeks.

“Before the Holy Week, planning and preparations were already done, that’s why we implemented basic health protocols and we have controlled crowding not only in churches and business establishments,” Lopez said.

Davao City Mayor Sara Duterte-Carpio also ordered the closure of beaches and resorts during the Holy Week to prevent gatherings in public places that may spread COVID-19.

On Tuesday, only 15 new cases were reported for Davao City bringing the total active cases to 297 out of the total 13, 849 cases since the start of the pandemic. With 22 new recoveries reported, the total recoveries pushed to 12,873. Lopez did not mention the number of new deaths, although he said case fatality rate has dropped to 4.9% with a total of 679 deaths since March 2020.

While the city government may have pre-empted a possible surge during the holidays, Dr. Jean Lindo, a practitioner of community medicine, said credit should also be given to Davao city residents.

“What I see among citizens, they are not ‘pasaway’ (hard-headed). In the neighbourhood, people put on face shields and observe social distancing, so the citizens are engaged and conscientious,” Lindo pointed out.

Lindo said that doctors, medical students and non-government organizations have mobilized to educate and engage communities to observe protocols to fight against COVID-19. One of the communities her group has supported is the UCCP Haran sanctuary for the Manobo Lumad.

Nevertheless, the CHO will want to continue with its heightened surveillance and response system to keep the coronavirus from spreading.

Lopez said the CHO will continue its conduct of ‘surveillance swabbing’ on close contacts of persons infected with COVID-19. So far, this has covered the Bankerohan and Agdao Public Markets, Sta. Ana, and Barangays 2A and 5A.

“In our District Health Center level, we already gave an order to the staff to establish surveillance units in which persons who complain of symptoms can go to the nearest centers to have themselves checked for free,” Lopez said.

“We only have a little less than 300 active cases in Davao so there is no reason to miss them. But we have to track down all the close contacts–F1, F2, F3 if possible–so that we can catch those who have been infected by the active cases and we can finally eradicate COVID-19 in Davao,” he added.

In addition to inspections in barangays, offices, and business establishments, Lopez also said in an interview via the city government website that concerned units also do house-to-house surveillance.