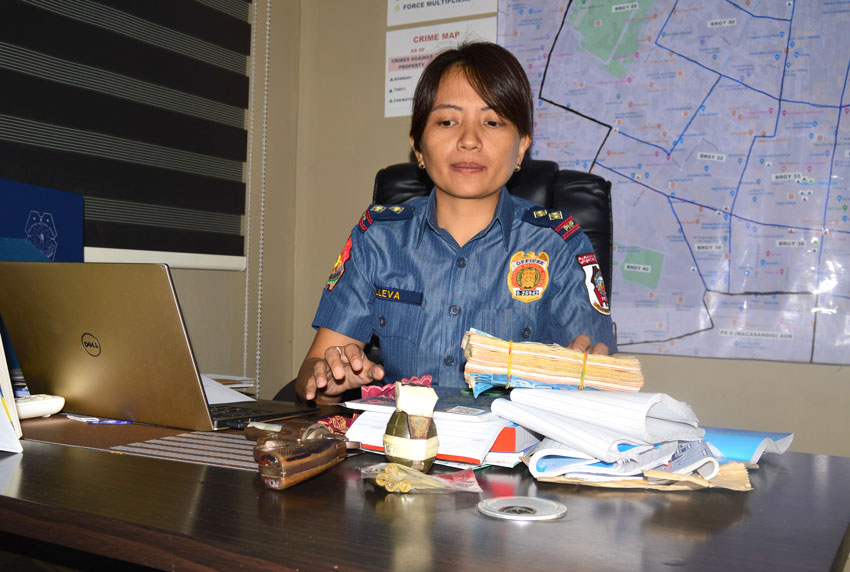 Cogon police station commander Captain Tessie Lleva with the items and weapons seized from the suspects from Tagum City believed to behind the series of “budol-budol” or swindling activities in Cagayan de Oro and other parts of Mindanao. (Jigger J. Jerusalem/davaotoday.com)

CAGAYAN DE ORO CITY, Philippines — A group from Tagum City believed to be behind the series of ‘budol-budol’ activities in the city and other parts of Mindanao was arrested by operatives of the Cogon police station.

“They are really good at sweet-talking their victims, and make them feel at ease around the suspects,” Captain Tessie Lleva, Cogon Police Station Commander, said.

The suspects were apprehended as they were about to talk to an elderly woman in front of an automated teller machine along Corrales Avenue Thursday afternoon, Aug. 8.

Lleva said Cogon police operatives responded to a pickpocketing incident outside a commercial establishment when they spotted the suspects allegedly ready to swindle a potential victim.

When the suspects saw the police officers coming their way, they tried to escape using their getaway vehicle. They were caught near the corner of Corrales C. M. Recto Avenue a few minutes later.

“Based on the number of CCTV footages we have on these suspects, we are already familiar with their profile and even the vehicle that they use to escape after committing budol-budol in the city,” she added.

Taken from the suspects were a bundle of fake money and paper, writing pads, a .38 caliber revolver with live bullets, and a hand grenade. The blue Toyota Revo the perpetrators used was also confiscated.

Dubbed by the Cogon police as the “Rivera Budol-Budol Gang,” the group, based in Tagum, has been victimizing several old women in different parts of the city and in other areas in Mindanao since 2017, Lleva said.

Last June, an elderly woman was swindled of over 300,000 pesos in cash, jewelry, and other valuable items due to ‘budol-budol.’

Lleva said they are still verifying if the perpetrator was Rivera’s group.

Since the group has a vehicle, they don’t stay in one place after victimizing someone. “They are mobile. They usually go back to Tagum after committing the act,” she added.

Lleva said the suspects will be charged with illegal possession of firearms and ammunition and illegal possession of explosive for the weapons that were seized from them. They will also face either swindling or estafa charges depending on the assessment of the prosecutor which will be based on the complaints. (davaotoday.com)