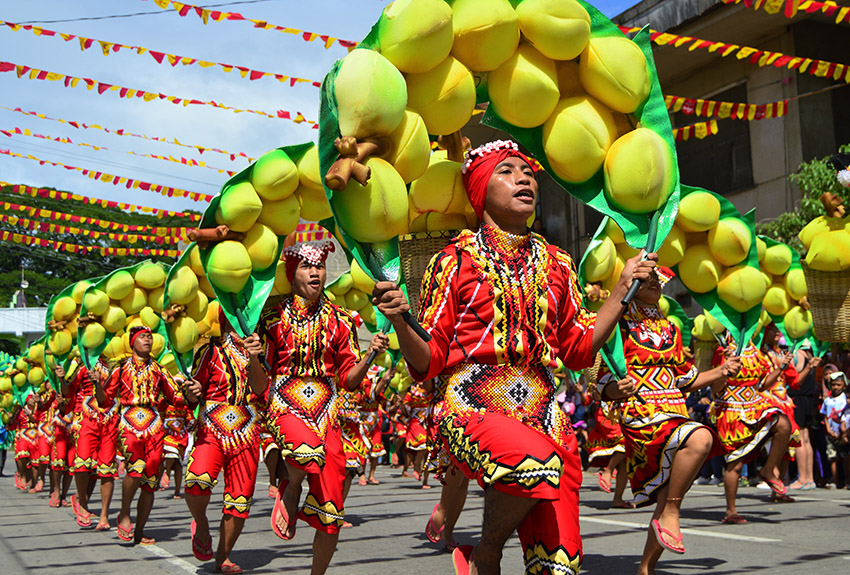 As the Camiguin’s 41st Lanzones Festival goes digital amid the coronavirus pandemic, major events such as the street dancing will be missed by local and foreign tourists this year. Photo taken during the 40th Lanzones Festival in 2019. (Jigger J. Jerusalem/davaotoday.com)

CAGAYAN DE ORO CITY, Philippines – For the first time in its more than four-decade history, Camiguin’s Lanzones Festival will still be celebrated this year without the physical presence of tourists and spectators.

This, of course, is because of the the coronavirus 2019 (Covid-19) pandemic, the province’s tourism office said Saturday.

The Lanzones Festival, slated on Oct. 18 to 25 this year, has long been considered as one of the country’s major festivities held in the island known for the distinctive sweetness of this tropical fruit and its dozens of tourists destinations.

But due to the threat of the Covid-19 infection, the festival’s organizers have decided to celebrate it online, said Candice Naome Dael, Camiguin’s provincial tourism officer.

“Now on its 41st year, the Lanzones Festival has been a hallmark event in the Philippines every October. With all of their abudance in arts, heritage, culture, food, natural wonders, and of course, its sweet lanzones, Camiguin should have been the island to be at this time of year,” Dael said.

She, however, said that the coronavirus halted all the grand plans for the 2020 celebration that involve the physical attendance of festival goers.

“With restricted movements of people and discouraged mass gatherings, staging it as spectacular as it used to be is something that everyone will surely miss this time,” she said.

Despite these challenges, Dael said the province is keeping its time-honored tradition of celebrating the bounty of the lanzones harvest in the digital space through various social media platforms.

Camiguingnons who have the dancing skills can join the “Buwahan TikTok Challenge” to show off how they celebrate the festival at home.

Solo, duo or family contestants can participate in the contest.

Shutterbugs will also get a chance to share their shots in the “Handurawan” online photo contest.

Vloggers, on the other hand, will be given the opportunity to tell stories about the island on YouTube.

Budding artists will also exhibit their artworks in the digital cover poster design competition, while designer wannabes will showcase their own version of the traditional wear called “paksoy” in the first-ever “Aggama Ki Ta Paksoy” design contest.

Another first is the Camiguin Foodscapes where the island’s rich culinary heritage can be viewed on Facebook.

In an online interview, Gov. Jurdin Jesus Romualdo said the events were organized under the “new normal” situtation. This includes the prohibition of mass gathering and the implementation of social distancing and other health protocols.

“These [activities] are all virtual. It means there will be no gathering of people, except for the TikTok contest, which is also limited within the family circle,” Romualdo said.

He said an entire family may join provided it is done inside the home.

“This is unique and relevant to our present situation,” the governor added.

Starting Oct. 19, customers can buy lanzones and other Camiguin products. For those who cannot visit the island, the provincial government has partnered with the Department of Tourism-10 for the three-day on-site sale of Camiguin’s products on Oct. 22 to 24.

As for the Lanzones yield for this year, Romualdo said that they are expecting to harvest 100,000 boxes at 20 kilos per box, which is lower than last year’s 250,000 boxes due to the weather condition.

Dael said all of the online activities can be viewed on Lanzones Festival’s official Facebook page.

Aside from Facebook, the provincial government also utilizes other social media outlets. (davaotoday.com)