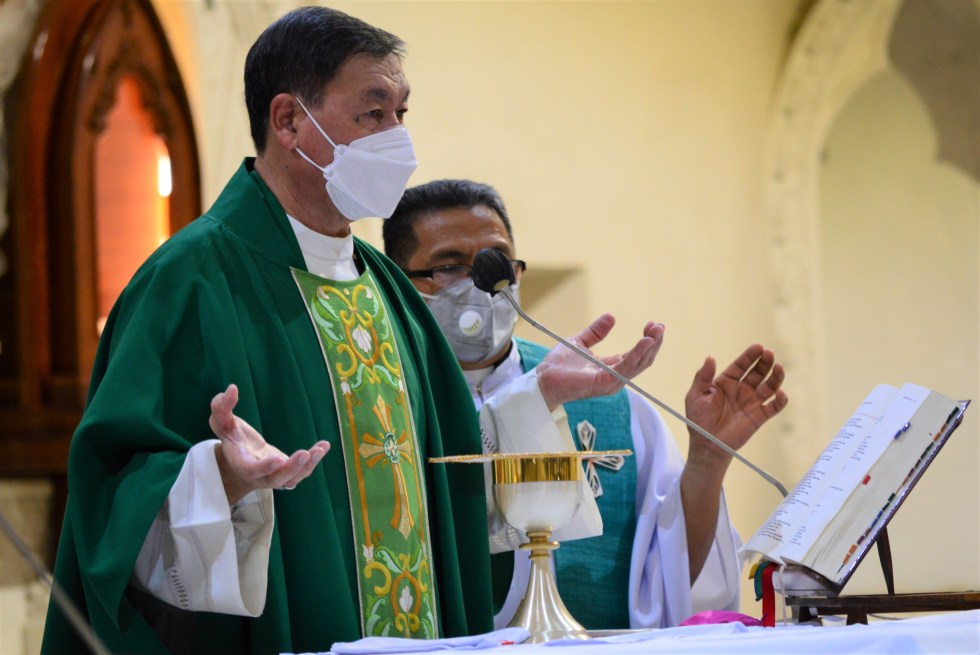 PRIESTLY ADVICE. In his Aug. 23, 2021 letter addressed to the archdiocese’s clergy, religious workers and faithful, Archbishop Jose Cabantan asserts that getting the COVID-19 vaccination is “morally acceptable” (Jigger Jerusalem/davaotoday.com)

CAGAYAN DE ORO CITY – As many members of the Roman Catholic Church seem divided over getting inoculated against the virulent COVID-19, the archbishop of the Archdiocese here has reiterated saying that getting the jab is “morally acceptable.”

In his Aug. 23, 2021 letter addressed to the archdiocese’s clergy, religious workers and faithful, Archbishop Jose Cabantan said he is upholding the stand of the church.

As there have been varied opinions on the vaccination campaign, this, he said, has created confusion in the secular society and even among the Catholics.

The differing opinion within the local Roman Catholic communities has prompted the prelate to issue the letter to erase doubts among the church members on the vaccination.

“In this directive, I would like to clarify that the Archdiocese of Cagayan de Oro affirms the pronouncements of Pope Francis, the Congregation for the Doctrine and Faith (CDF) and also those of the Catholic Bishops’ Conference of the Philippines (CBCP), as well as the Bishops’ Conferences worldwide,” Cabantan said.

Cabantan cited a statement from the CDF in December 2020 declaring that “vaccination is morally acceptable against the Covid virus.”

“All vaccination recognized as clinically safe and effective can be used in good conscience with certain knowledge that the use of vaccines does not constitute formal cooperation with the abortion from which the cells used in some aspects of research and production of the vaccine may derive,” he said.

In the absence of other means to stop and prevent the pandemic, he added, the common good may recommend vaccination especially the weakest and most exposed.

“Vaccination is not just to protect one’s own health but also to promote the good within society,” he said.

Quoting a statement from the United States Conference of Catholic Bishops, Cabantan said, “the act of vaccination can be ‘an act of charity… an act of love of our neighbor and part of our moral responsibility for the common good.’”

Of course, he said, some with co-morbidities and following the advice of their doctors may not avail of vaccination.

“To these, and those who for reasons of conscience do not wish to be vaccinated, they must all still do their utmost to avoid becoming vehicles for the transmission of the infectious agent,” the archbishop said.

Cabantan said that earlier this year Pope Francis has announced that “people have the moral obligation to receive one of those vaccines. It is a moral choice, a moral duty because it is about your life and the lives of others.”

“Just recently, through a video message, Pope Francis urged people to get inoculated. First, he thanked God for the vaccines – our hope of ending the pandemic only if it is available to all,” he said.

The pope, Cabantan added, underscored that vaccination is a simple but profound way of promoting the common good and caring for one another especially the most vulnerable. He also added that it is an act of love for oneself, for one’s family and friends and for all people.

In their January 8, 2021 pastoral letter, Cabantan said, the country’s bishops “acknowledged the role of conscience in all our decision making and repeat the Vatican teaching that when ethically irreproachable Covid-19 vaccines are not available, it is morally acceptable to receive the Covid-19 vaccines offered.”