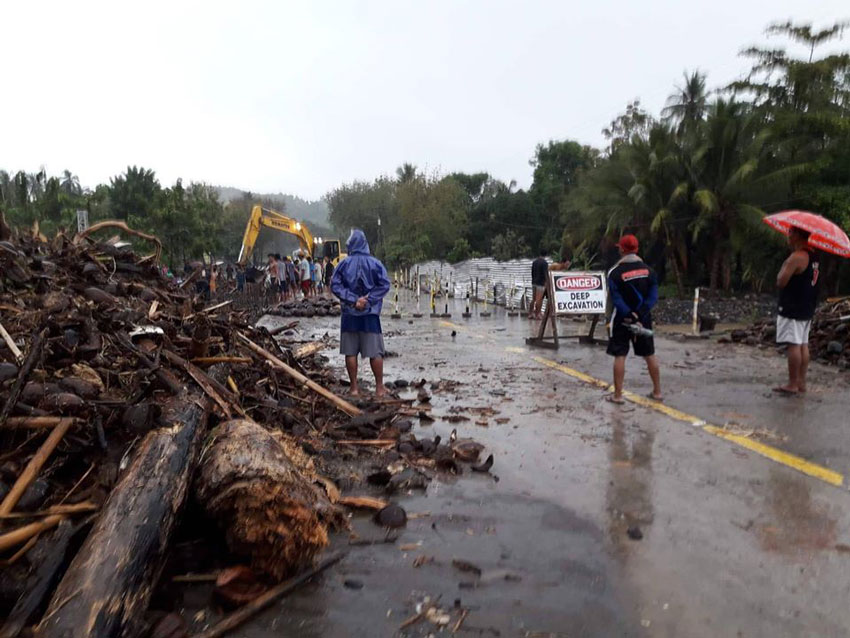 Authorities were clearing the debris blocking the Masipit Bridge in the town of Tarragona. The bridge was temporarily closed to all types of vehicles. (Photo from Province of Davao Oriental’s Facebook page.)

DAVAO CITY, Philippines — More than 3,000 individuals from three areas in Davao Oriental have to evacuate from their homes due to hours of heavy rains since Monday night due to Tropical Depression Chedeng.

The state’s weather bureau PAGASA said TD Chedeng has already weakened into a low-pressure area as it made landfall in Malita, Davao Occidental around 5: 30 a.m. on Tuesday, March 19.

Based on a report from the Provincial Disaster Risk Reduction and Management Council (PDRRMC) of Davao Oriental, around 920 families or 3,654 individuals from the towns of San Isidro, Cateel, and Mati City, particularly those residing near riverbanks and flood-prone areas had to leave their homes and took temporary shelter in barangay centers.

The PDRRMC also reported that the Masipit Bridge in Barangay Central, Tarragona town is impassable to vehicles due to damage caused by the onslaught of TD Chedeng. Clearing operations are ongoing to make the said bridge passable to commuters in the area, the PDRRMC added.

Classes and work in government offices in the province of Davao Oriental is still suspended on Tuesday, March 19.

The LPA, based on PAGASA’s 10:00 a.m. bulletin on Tuesday, was estimated in the vicinity of Lake Sebu, South Cotabato and expected to continue to bring scattered moderate to heavy rains over Zamboanga Peninsula, Bangsamoro, North Cotabato, Davao del Norte, Davao del Sur, and Davao City.