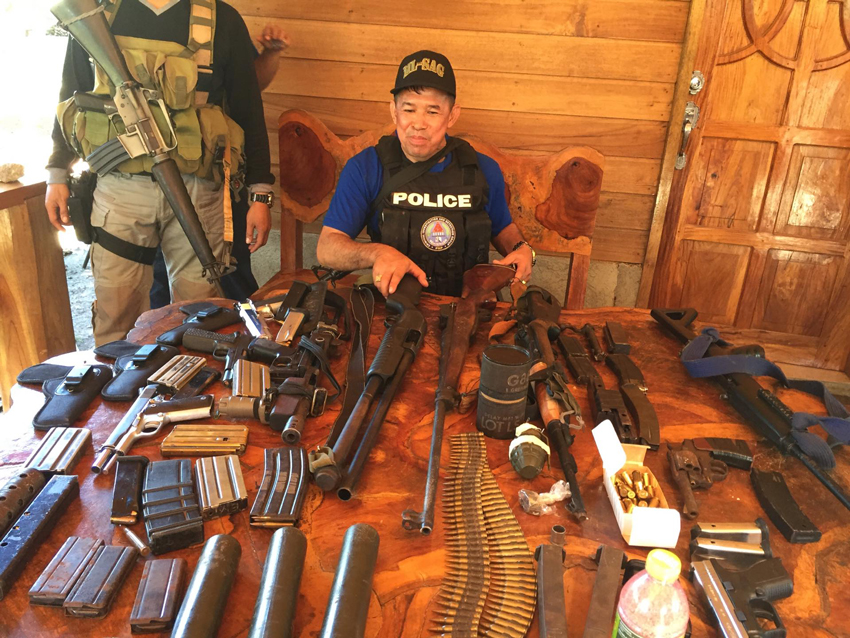 Criminal Investigation and Detection Group-10 (CIDG) operatives take an inventory of the firearms and ammunition that were confiscated following the raid of the house of Cherry Barros, the village chair of Kinawe, Libona, Bukidnon on Saturday dawn. (Photo courtesy of CIDG-10)

According to the Criminal Investigation and Detection Group-10 (CIDG), they are still verifying the report that Cherry Barros, the village chief of Kinawe in Libona town, is connected with the Kuratong Baleleng (KB), a drug criminal group based in Misamis Occidental thought to have been long disbanded following the deaths of its leaders.

Barros and 18 others were arrested by a team of police and military operatives in a dawn raid on Saturday, April 21.

Individuals inside the Barros compound in Zone 3, Kinawe, opened fire against the government agents as the latter were about to serve the search warrant for Barros.

SPO4 Noel Oclarit, CIDG-10 chief investigator, said Manatad was hit on his left chest but he was declared out of danger by attending physicians.

The authorities later arrested 19 individuals and confiscated various types of firearms and ammunition at the crime scene.

The village chiefs husband, Tarcisio, and a still unidentified person were said to have escaped.

Our operatives are still in pursuit of the suspects who got away, Oclarit said.

He said it was possible that the two persons who escaped during the raid were also wounded since responding agents saw a trail of blood on the ground.

“As we approached the Barros compound, we were fired upon. We had no choice but to fire back,” Oclarit said.

He said the armed men only surrendered when they ran out of bullets. The firefight lasted for almost an hour, he added.

He said they were also tipped off that Ricardo Ardot Parojinog had been staying at the Barros compound but they could not yet verify if he was one of those who managed to escape the raid.

In an interview, Barros denied the accusation that she was involved with the armed men.

She said most of the confiscated firearms were registered.

Oclarit said most of the suspects have confirmed that they are members of the KB and came from Ozamiz.

He said Pres. Rodrigo Duterte during the election campaign had mentioned Barros as a KB member.

Oclarit added that they were able to gather information that Barros is alleged to have been maintaining a private armed group, as well as involved in illegal mining and land-grabbing in Libona.

The CIDG-10 said the suspects will be facing attempted murder and frustrated murder charges, and for violation of RA 10591 and RA 9516.

Barros’ husband Tarcisio, a former Kinawe barangay chairman, figured in an ambuscade that killed his 14-year-old son in January.

The teenage Barros succumbed to a gunshot wound to his head.

Investigators said the ambush may have something to do with the land conflict the Barros family was involved in with their relatives. (davaotoday.com)