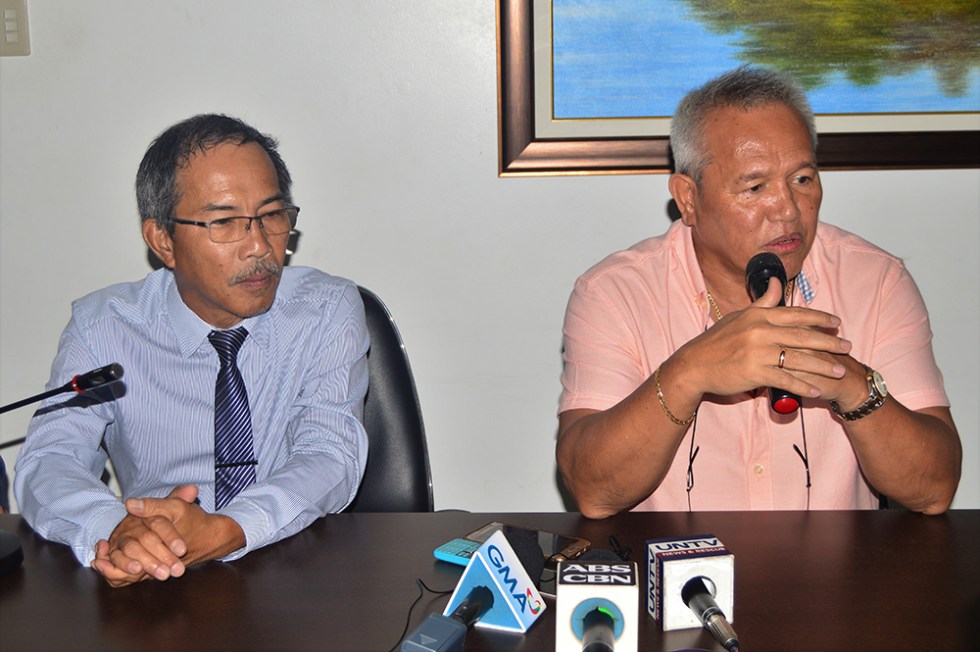 In this file photo taken on September 11, 2017, Cagayan de Oro City Mayor Oscar Moreno (right) talked to reporters during a press briefing on the Supreme Court ruling pertaining to the decision of the Court of Appeals on some of the criminal and administrative cases filed against him by several individuals, inside his office. At the left is the chief of his legal counsel, lawyer Dale Bryan Mordeno. (Jigger J. Jerusalem/davaotoday.com)

CAGAYAN DE ORO CITY, Philippines – A new court order has blocked the dismissal of this city’s chief executive who is set to face a series of complaints in the coming days.

The cases, filed by his critic Antonio Nuñez, stemmed from the allegations of irregularities in the rental of heavy equipment between 2007-2012 when Moreno was the governor of Misamis Oriental, in the amount of about P30 million.

In previous interviews, Moreno has clarified that the transaction was legal and that the provincial government during that term had no choice but to rent heavy equipment for the opening and maintenance of roads in Misamis Oriental.

“Although we are confident that based on the merits of the case, the equipment rentals were aboveboard, nothing hinders the mayor from invoking the condonation of administration penalties due to subsequent reelections,” said lawyer Dale Bryan Mordeno, Moreno’s chief legal counsel.

Mordeno said the cases should have been dismissed outright as there were no irregularities committed by Moreno.

He said that the Commission on Audit-10 (COA-10) decided against any irregularities in the equipment rental when it ruled that it is “incontrovertible fact that services have been rendered, services of equipment not found exceeding prevailing rental rates, benefits enjoyed by the public, and accomplishments duly recognized and cited.”

Moreno was reelected as mayor in 2016 under the Liberal Party, beating his political opponent, Vicente “Dongkoy” Emano who served as this city’s mayor for 12 years.

Aside from the rental of heavy equipment, Moreno was also sued for the quarters of the city’s aspiring boxers and the tax settlement made between the city government and Ajinomoto Philippines.

“We are expecting more cases of similar nature,” Mordeno said, as he admitted that the chopping up of cases is really a hassle.

Of the 48 cases lodged at the Ombudsman against the mayor, Nuñez had filed 26 complaints, 15 of which are criminal in nature and 11 administrative.

Moreno has maintained that the series of cases he is facing is part of the “hazards of politics” and would rather face it alone.

He, however, assured his supporters that his legal team is doing everything to defend him.

“Mayor Moreno and the city will come out stronger with the delivery of justice,” said Barangay Gusa chairman Marlo Tabac.

Another one of Moreno’s complainants, William Guialani, a former village chairman in the city, also filed a complaint against the mayor at the Office of President Rodrigo Duterte recently.

Guialani alleged that Moreno had released eight checks amounting to P79 million, which Mordeno countered that the checks were for the PhilHealth program of the city and that there was nothing anomalous about them. (davaotoday.com)