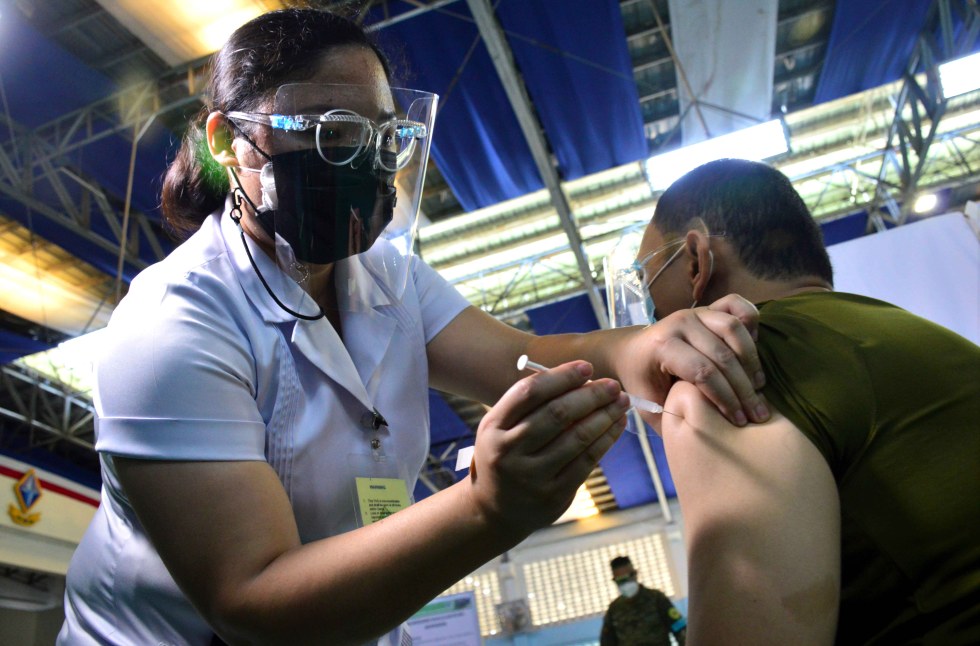 DAVAO CITY, Philippines – Vaccine jabs have begun in Mindanao with the arrival of the vaccines for COVID-19 on March 5 in different cities in the island.

In Davao City, 33,600 Coronavac from Beijing-based Sinovac Biotech were delivered to the region while 745 were sent to the Philippine Army’s 4th Infantry Division (4ID) hospital in Cagayan de Oro City to inoculate its health care professionals.

The Coronavac delivered to Davao were distributed to various areas in the region on March 7 where health care professionals are expected get the shots beginning today, March 8.

“We will start the vaccination on March 8 in the different areas in the region. From the regional office, [the vaccines] will be travelled to the provincial health office of the respective provinces,”Department

of Health (DOH) Davao region director Dr. Annabelle Yumang said during the press briefing at the launch of the vaccine rollout inside the Southern Philippines Medical Center (SPCM) on March 5.

SPMC Chief Dr. Ricardo Audan, one the medical frontliners who received the first dose of Sinovac vaccines in SPMC, encouraged his fellow healthcare workers to get shots as soon as possible.

Health officials in the region said there is a high acceptance rate of the vaccine among healthcare workers at SPMC in Davao City and Davao Regional Medical Center in Tagum City.

Dr. Yumang said Davao region has 18,656 healthcare workers in level 1 to level 3 hospitals while they are still getting the total number of other medical frontliners in barangays, treatment facilities, and laboratories processing COVID-19 samples.

As of March 4, DOH Secretary Francisco Duque III, said that 13,629 out of the country’s 1.7 million healthcare workers were already vaccinated with Coronovac vaccine produced by Sinovac Biotech in Beijing, China.

But to those who refused to receive jabs of the Coronavac, Duque said, they are still in the priority list for the AstraZeneca made vaccine, which just arrived in the Philippines on March 4.

The rollout of AstraZeneca made vaccines may start on Saturday, March 6, Duque said.

Col. Joanna Dalaguit, CESH commanding officer, said the national government has allocated 745 Coronavac vials to the division, with the 4ID medical workers as the priority recipients.

Dalaguit, the first to get Coronavac shot, said they plan on inoculating all the health care staff across the division’s jurisdiction, Northern Mindanao and Caraga regions, in the next few days.

CESH, she said, has 60 staff and medical officers, which will be the first to receive the vaccine.

Health workers from the medical facilities in the 4ID brigades and battalions will also be inoculated.

Next on the list for inoculations are soldiers deployed in checkpoints, and other personnel who are also exposed to COVID-19.

Defense Secretary Delfin Lorenzana said CESH is the first Army medical unit in Mindanao to get the doses of the 70,000 Coronavac vials apportioned for the Army’s medical workers from the 100,000 doses intended for the Defense Department.

Carlito Galvez Jr., National Task Force Covid-19 response chief implementer, said that aside from the Coronavac, almost half a million of Astrazeneca vials have recently arrived.

Galvez said members of the Armed Forces of the Philippines must avail of Coronavac as it is free, although they have a choice not to be inoculated with the doses manufactured by Sinovac as he added saying, “If you don’t want it, you can choose your own, at your own expense.” (davaotoday.com)