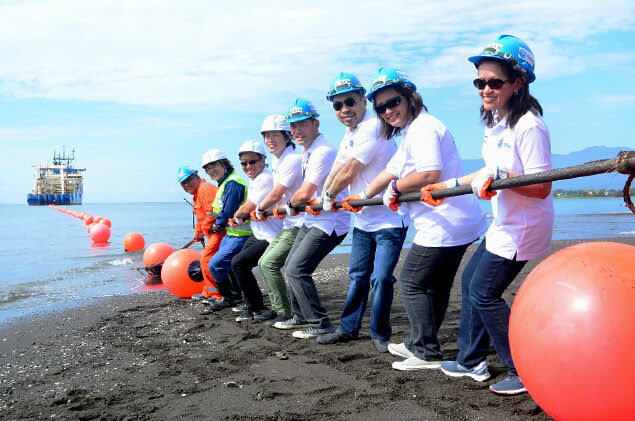 DAVAO CITY, Philippines – The $250-million Southeast Asia-United States (SEA-US) submarine cable system will provide the city and the island of Mindanao the “best connectivity” with a capacity of 800 gigabits per second (gbps), Ernest L. Cu, president and chief executive officer of the Globe Telecom, said during the launch here on Friday.

The city is the first area in Mindanao to have direct connection of Globe to the United States via Guam, Hawaii and California. The power feed equipment site in Barangay Talomo, which was opened in August, will serve as the cable system’s landing station.

The project “complements the National Broadband Plan (NBP) of the government” and is expected to generate more investments and job opportunities in the city and Mindanao, said President Rodrigo Duterte, in his speech as read by Presidential Communications Operations Office Secretary Martin Andanar at the launch.

The NBP is set to ensure the delivery of universal, fast, reliable, affordable broadband internet services to Filipinos in a digital economy by providing necessary policy, regulatory and infrastructure interventions.

“The public and private sectors must work together and collaborate more in developing our country’s information infrastructure,” Duterte said.

The SEA-US cable system project aims “to provide not just faster transmission and better efficiency of connectivity but, more importantly, network resiliency,” Cu said. Damage and interruption of internet connection due to typhoons and other calamities can be avoided with the new undersea cable facility, he added.

“It will enable businesses to thrive and prosper with first-world internet connectivity at cost-efficient rates in support of the government’s efforts to make the Philippines become globally competitive,” Cu said. (davaotoday.com)