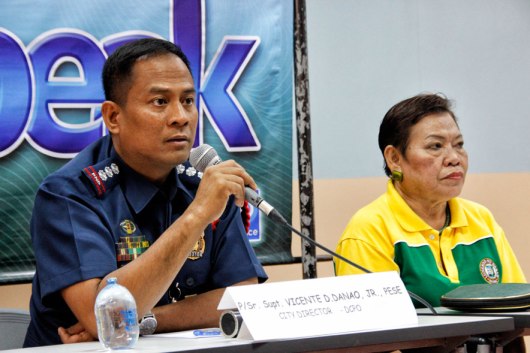 Davao City – As Super Typhoon Yolanda is now making landfall in the Visayas, authorities placed the city on alert 1 to monitor surge of rivers and asked for preemptive evaucation of residents along riverways and landslide-prone areas.

Emmanuel Jaldon, chief of the Emergency Response Center Central 911 said that the typhoon Yolanda might impact on the city in form of heavy rains and surge of high tide, and might lead to flash floods.

Typhoon Pablo is projected to carry winds at around 215 kph, and heavy rainfall across the country including Mindanao.

Jaldon advised residents along riverways especially in Davao River to take pre-emptive evacuation.  Jaldon added their 911 units are on standby to respond to emergencies.

On January 21 early this year, heavy rain caused the city’s four rivers to overflow and flooded 13 barangays including areas in Bankerohan, Buhangin, and Maa that displaced close to 40,000 people.

On June of 2011, a surge of floodwater engulfed villages in Bangkal and Matina Crossing, killing around 28.

Davao City Police Office Director Senior Superintendent Vicente Danao said “The people must no longer wait for the storm to fall before they prepare.  They must move out as early as now.”

Meanwhile, Davao City Mayor Rodrigo Duterte announced late Thursday night that “suspension of classes by private schools in any or all levels and work of employees shall be left to the discretion of school authorities and employers.”

Davao del Norte and Compostela Valley had activated their incident command system of the Provincial Disaster Risk Reduction Management Council (PDRRMC) to be on standby and monitor the movement of rivers.