A night before Foodpanda delivery riders started their three-day rest from their delivery schedule to air their grievances, Beni got a message from the company saying his account is suspended for joining this protest.

Other riders who were planning to join the protest also received the same notification that their accounts are suspended for ten years until July 13, 2031. 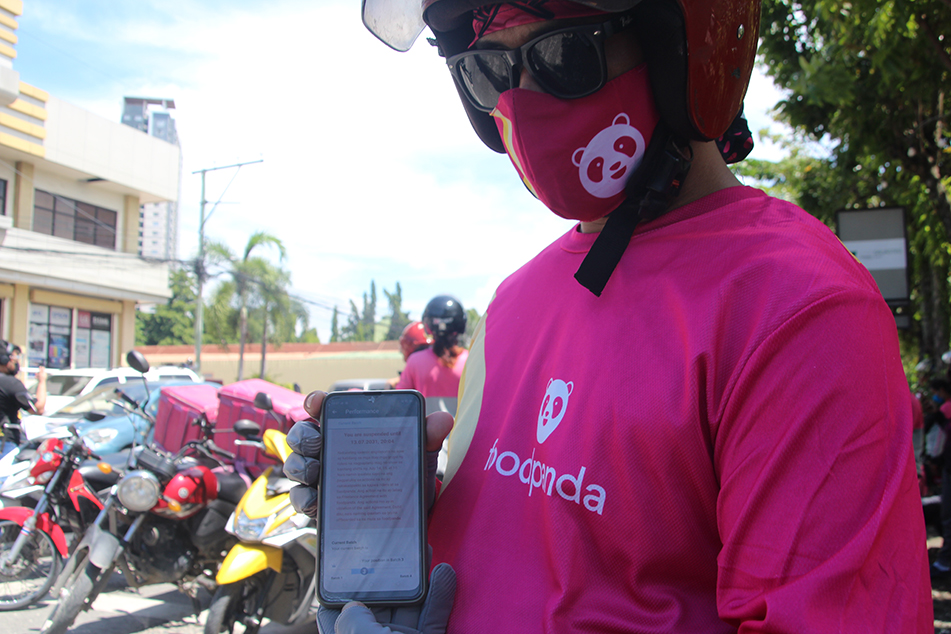 SUSPENDED. A FoodPanda delivery rider shows the notification on his phone telling him that he is suspended until July 13, 2031.

(We have received reports that you are one of the group of riders that planned a no-show in their shifts on July 14, 15 and 16. We want to remind you that if you continue with these actions, this will affect fellow Foodpanda riders. This action violates the Freelance Agreement with FoodPanda. Your action is in violation of the said agreement. For this, we are informing you you are offboarded from FoodPanda.)

His suspended account meant Beni cannot claim the P1, 050 earned from delivering food orders from the previous days. He was supposed to set aside this money for his son’s birthday this Sunday.

“Wala na ma’am, paspas kaayo nakasuspend sa among account. Wala man lang gani mi gipangutana kung tinuod nga mag no show gyud mi or na late ra mig kuha sa schedule. Normal man unta mangreklamo mi kay wala man gyud silay klaro, (No, they were quick to suspend our accounts. They did not even ask to verify if we are really staging a no-show or we were just late in getting our schedule. It is normal that we complain because they were ambigouos)” Beni said during their protest action that saw 300 riders gathered in Roxas Avenue on the morning of July 15.

Foodpanda riders had already raised complaints to their management last year on certain issues which the management did not address.

“Actually dugay na ni nga problema sa mga riders. Nagsige na mig reklamo pero wala ni aksyon sa ilang side (Actually this problem had persisted for a long time, we had complained to them but there was no action from their side),” said Edmund Carillo, president of the Davao United Delivery Riders Association Inc.

Last April, the riders complained to the city government that the Foodpanda management passed on to them the burden to pay their business permits amounting to P4,000, which prompted City Councilor Pamela Librado-Morata to facilitate a consultation that pushed for the suspension of the permit collection.

Carillo said they also encountered instances when management would suddenly suspend the riders’ account for violating delivery protocol and terminate their partnership without benefit of dialogue.

He pointed out that management suspended around 300 accounts, citing a violation of a “No Show” provision as they decided to hold a ‘three-day rest day’ as a form of protest.

Upon learning that they were terminated from work, the riders decided to conduct a motorcade protest on Thursday ending at the Foodpanda Davao Office to Roxas Avenue, to express disappointment on the company’s move to terminate their contract instead of addressing their complaints. 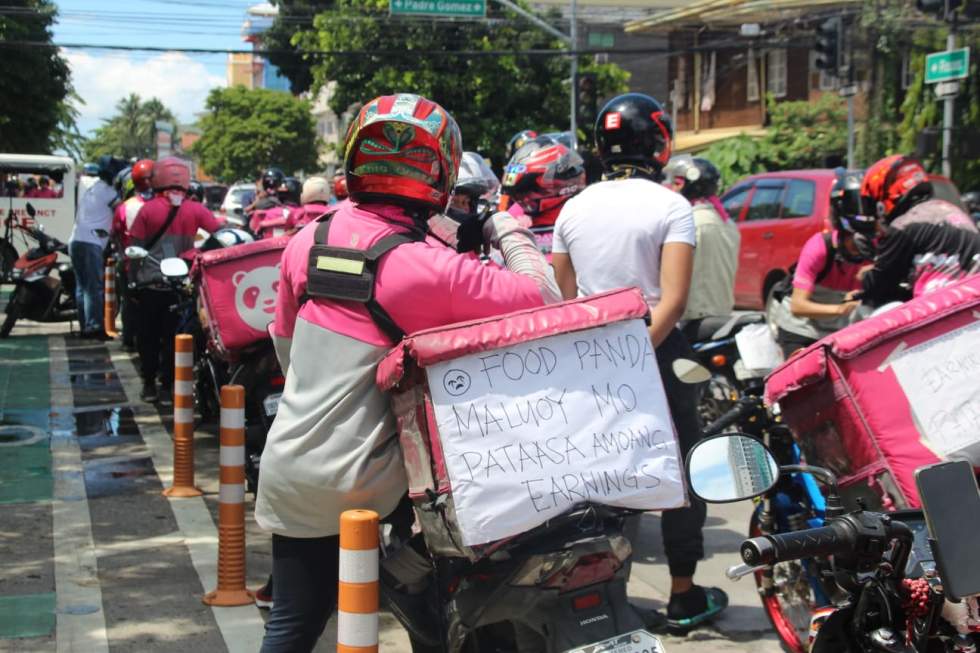 NO DELIVERIES. Around 300 Food Panda delivery riders stage a motorcade protest at Roxas Avenue on Thursday, July 15, 2021 against their company due to unfair labor. Among the issues they raise are the sudden termination of work, discrepancies in the computation of percentage per delivery and the call for salary increase. (Kath M. Cortez/davaotoday.com)

Carillo clarified that they did not initially plan to do the motorcade protest but did so upon learning that while the company terminated their accounts, they started to hire new riders to replace them.

On the same day of their protests, hundreds of individuals were seen queueing at the Foodpanda-Davao office as received Foodpanda bags and uniforms distributed by company personnel.

Carillo said these new riders may experience the same thing they had with the management.

Once a rider is considered as a partner of the company, they will receive a Food Panda mobile application, attend an orientation, and pay for their uniform and delivery boxes. During the orientation, the company will discuss ‘the benefits of being their partner’ as a rider.

But in the whole process, Beni and Carillo said the management did not talk about the ‘Freelance Agreement with Foodpanda’ that they mentioned in the notification nor explained the basis of computation of percentage per delivery that they will receive.

Carillo said there is no contract or agreement to begin with as a basis of this violation to terminate riders from work.

“Paspas ang termination sa among account apan sa pikas bahin sab isip partner man unta sa kompanya wala mi nadawat nga hazard pay man lang unta. Daghan kaayo sa among mga kauban mangasakit kay mupaulan, musulong sa baha kay aron lang madeliver ang order. Naa man gani mangadisgrasya pero wala gyud mi nadungog ana sa kompanya, (They terminate our accounts quickly, but to think of it, we are considered partners of the company yet we do not receive hazard pay. Many of us have gotten sick exposed to the rain, drove through flood just to deliver our orders. There were even some who met accidents but the company did not care),” Carillo said.

In the absence of the Freelance Agreement, the riders say they were puzzled about some company policies.

How much do riders earn?

Another rider, Boyet, said the company has its own computation of its delivery percentage which often makes them receive a lower payment. He said Foodpanda computes their percentage per delivery through its own online application system where the rate is based on road distance between the food supplier and the customer.

Riders earn P23 per delivery in a road distance of Bonifacio Street to City Hall that is 800 meters within the maximum delivery time of 10 to 15 minutes. But Boyet said the calculation does not consider the city traffic and other factors like road construction which are plenty in the city that forces them to find other routes.

For long-distance delivery like from R. Castillo to Cabantian area which takes about 7 to 8 kilometers, he said they only earn at least 30 to 40 pesos from the company’s own calculation of distance. 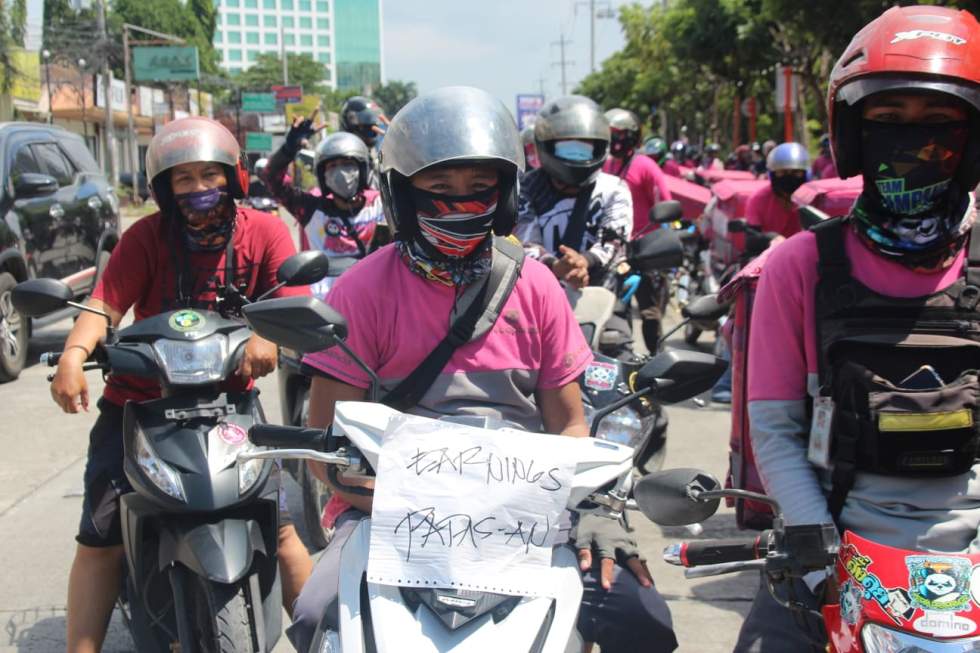 There is an increasing number of riders employed by Foodpanda due to the pandemic, which is estimated at around 1,600 riders.

To accommodate these huge number, the company divided them into four batches.

Batch 1 comprises only 10 percent of the delivery riders and they earn a maximum of P800 a day, while batches 2 and 3 earn at least P700 depending on the orders in their delivery schedule.

Batch 4 is the biggest batch approximately 50 percent of the total riders, and have the least delivery schedule and are mostly on-call during wee hours at night until dawn.

In a month, a rider spends P1,200 for load allowance, P4, 500 on gasoline (at P150 per day) and P350 for motorcycle maintenance. Most riders also allot their income to pay for the monthly installment of their motor vehcile worth P2,500 to P6,000 depending on the model of their motorcycle units for three to five years.

“Sa tinuod lang mam wala na may mabilin sa amoa ana nga income kay estimate pa lang gani na. Permi gyud may gamay among income kay daghan kaayo mi mag-ilog sa delivery, (Honestly, we don’t save anything from our income because of these costs. We earn little because there are plenty of us scrambling to meet delivery), ” Beni said.

As a father of four, Beni turned emotional talking about how to support his family now he has lost his job.

He is also worried about his motorcycle unit that he has been paying for over 14 months. He is now thinking of returning the unit to the lending company or find another job to continue his payment.

But finding another job is another struggle as the economy is in crisis due to the government’s restrictions in this pandemic.

“Tungod ani nga sitwasyon namo, magbirthday akong anak nga wala gyud koy mahanda bisan gamay kay unsaon man wala wala gyud. Unta lang naka sabot ang kompanya sa amoa nga wala man mi plano gubaon ang operation, ang amo lang hatagan sab gamay nga pagtagad ang among sitwasyon, (Because of our situation, my child will not even have a little celebration because I have nothing. I wish the company understand us, we do not mean to destroy their operation, we just want them to address our situation),” he added.

Beni and many other Foodpanda riders share the same sentiments as they staged their protest, asking the city government to intervene to protect the riders.