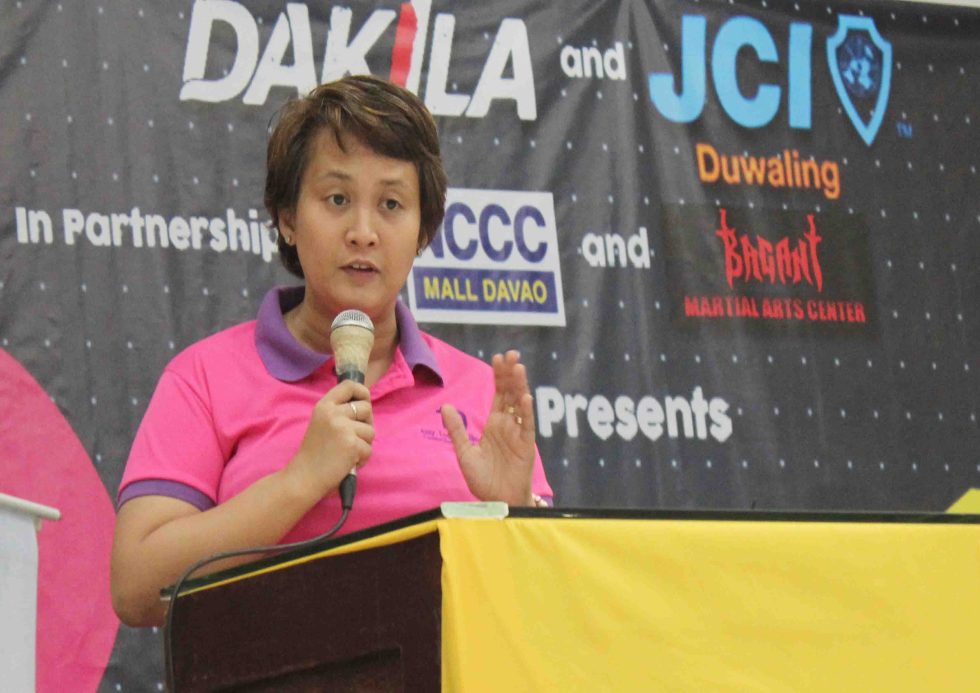 PINAY POWER. Davao City Councilor Leah Librado-Yap lectures on violence against women during the “Fight for your Rights” Seminar and Self Defense Training for Women held on Tuesday, March 29 in the city. (Medel V. Hernani/davaotoday.com)

DAVAO CITY – Women from various organizations and sectors gathered last week at a mall here for a free self-defense seminar. The event dubbed “Fight for your Rights” last Tuesday, March 29 was part of the commemoration of the women’s month.

Jessica Madrazo, managing director of Dakila Davao said the idea of a self-defense seminar came after attending a training offered by the Bagani Martial Arts Center.

“The actual conceptualization of the training is from Bagani. And Dakila is open to help if you have a great idea, we can help you make it bigger to bring more people to it,” said Madrazo.

“We attended their training and saw it was good,” she said.

During the event, instructors from Bagani taught basic self defense movements to help the women prepare and avoid attacks against them.

“Abuse (against women) is also physical so you have to be able to defend yourself. You need not only be ready legally and mentally, You also have to be physically ready,” Madrazo said.

Cecilia Garcia, 54, was among the participants of the seminar. Although she did not join the training, Garcia said she saw how helpful the defense training is to women.

“Dapat maraming ganito na event so women can stand up for themselves(There should have more activities like this),” she said.

Garcia is a victim of domestic violence for four to five years.

“An abusive partner manifests early, but I didn’t know I am a victim of battering already,” she said.

Garcia said she “never got the chance to voice it out.”

“You are muffled by the society,” she said.

The Center for Women’s Resources’ study showed that there is an alarm with the rise of the number of victims of violence against women and children (VAWC).

“One woman or child is raped every 53 minutes; one woman is battered every 16 minutes. Seven in 10 victims of rape are children,” this is according to a sudy conducted by the CWR, a 34-year research and training institution for women.

Jojo Guan, CWR’s executive director, said violations of the Republic Act (RA) 9262 or the Anti-Violence against Women and their Children Act “escalated by 200% from 2010 to 2014.”

“Despite more than  37  laws,  executive and  administrative orders pertaining to protect  women and  children, the victims of violence are getting younger and the abusers are becoming bolder and harsher,” Guan said.

Madrazo also cited the 2008 National Demographic and Health Survey (NDHS) “Women Safety Module” which said that one in five women in the Philippines aged 15-49 has experienced physical violence since age 15, while around 14.4 percent of married women have experienced physical abuse from their husbands.

Madrazo said they hold the event “not to judge those women who are still asking those questions, but to empower them.”

“Many women are faced with difficult questions, probably the most difficult questions they have faced in their lives. ‘Is my partner hurting me? What do i do? Do i file a complaint? What happens to me and my children if i do?’” said Madrazo.

Madrazo added that sometimes women are not aware that the answer to those difficult questions could cost them their sanity, their emotional stability, and even their lives.”

“We enable change today by empowering the women, because we believe that empowering women mentally, legally and physically, we empower the entire nation,” she said.(davaotoday.com)