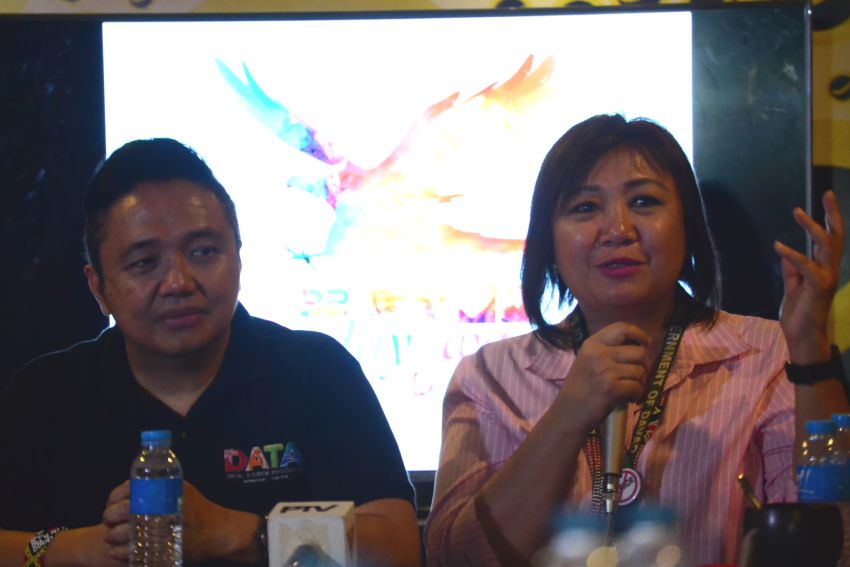 Kadayawan 2017 Festival Director Gatchi Gatchalian and City Tourism Operations Officer Generose Tecson say they are hopeful the city will exceed last year’s 168,000 tourists during the Kadayawan festival despite the extension of Martial Law in Mindanao. In a press conference in Davao City Thursday, July 27, the officials said this year’s celebration of Kadayawan is the “grandest and loudest.” (Robby Joy D. Salveron/davaotoday.com)

City Tourism Operations Officer, Generose Tecson said in a press conference on Thursday, July 27, they hope that despite of the Martial law implementation in Mindanao, tourists will flock what they described as the “grandest” Kadayawan.

The tourism sector here has been one of the major sectors that took the brunt after President Rodrigo Duterte declared Martial law in May 23.

It was noted that days after the declaration, an estimated P20 million revenue loss in tourism was recorded by the City Tourism Office because of the “stigma” of Martia Law. However, weeks after, the tourism sector was said to recover and regain trust from visitors.

Tecson said in June and July, various visitors from local government units of Cebu, Ilo-ilo and Dumaguete visited the city. She said this indicates that visitors remain to trust the city’s security.

Tecson also cited the recently held Ambassadors’ Tour which she said made a big impact to the city’s tourism industry.

“The Ambassadors’ Tour made a very big impact kasi parang kung ang mga Fil-Ams and Americans were able to come here and posted positive things about Davao, then why not the rest of the country?” Tecson said.

Tecson said the committees for the Kadayawan have already completed more than 50 percent of the preparations.

Festival Director and Davao Tourism Association President, Gatchi Gatchalian said with the various gathering and conventions being held in the city, they can already feel visitors coming in despite the extension of Martial Law.

“We are confident na magbabalikan na sila most especially in time for Kadayawan,” he added.

Gathcalian said the Tourism Promotion Board allotted a total of P1.5 million cash for the promotion of Kadayawan festival where billboards will be put up in other cities including Manila, Cebu, Ilo-ilo and Zamboanga.

Meanwhile, a total of P32 million from the city government and the private sector is set to be alloted for this year’s Kadayawan festival.

“The city is putting out P4 million plus the P13 million held in trust for Kadayawan and the balance will be raised by our private sector. They’ve promised about P15-P20 million pesos,” Tecson said.(davaotoday.com)