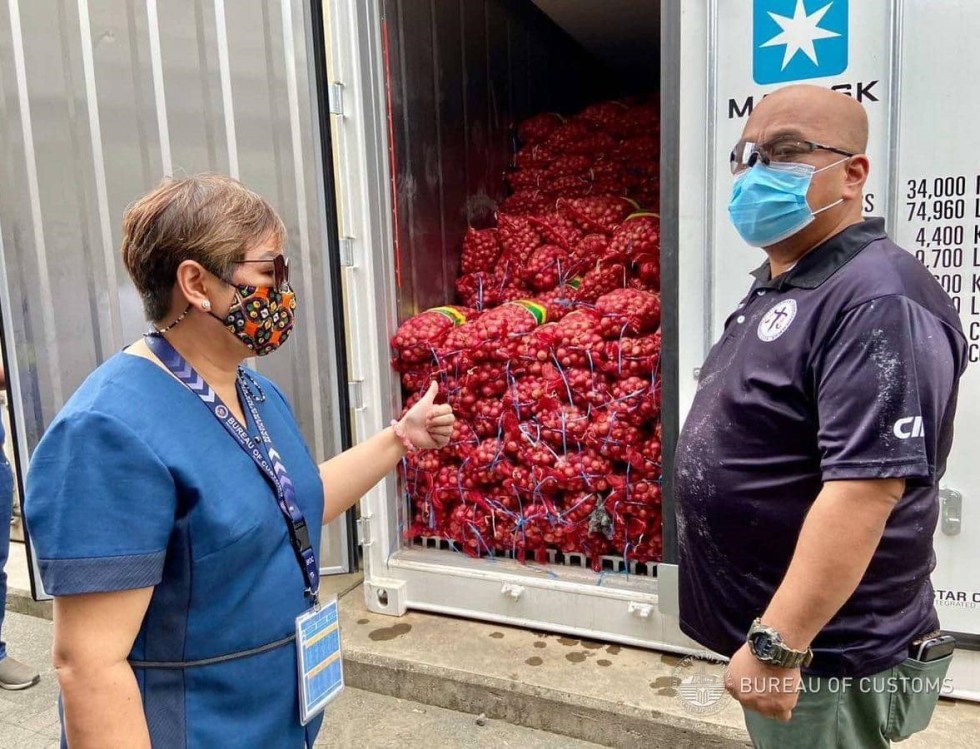 This was how the items inside the six-container-van shipment from China were declared to Philippine authorities. But the container vans were filled with white and red onions, officials of the Bureau of Customs-10 have learned prodding them to conduct a crackdown operation on July 28 at the Mindanao Container Terminal (MCT) sub-port in Tagoloan, Misamis Oriental.

The shipment, consigned to Primex Export and Import Producer (PEIP), was valued at P18 million.

“We don’t know why they (smugglers) keep on doing it. But, for our part, we have intensified our campaign against smuggling per directive of Pres. Ferdinand Marcos Jr., especially on agricultural products,” said Oliver Valiente, field chief of BOC’s Customs Intelligence and Investigation Service (CIIS) in Northern Mindanao, in a recent interview.

BOC-10 conducted a series of crackdown operations which resulted in the confiscation of agricultural products that were wrongfully declared. These smuggled products from China, seized on four separate occasions last July, were estimated to have a market value of P66 million.

On July 22, three of the seven containers consigned to Frankie Trading Enterprises were flagged down. Its documents said contents were butter or dairy spreads, but were actually onions placed in carton boxes labeled as “pears”.

The remaining four container vans, consigned to PEIP, were declared as “spring roll patti” in its inward foreign manifest. However, the vans were filled with red and white onions. The seven containers were estimated at P21 million.

On July 19, after an examination, the BOC-10 determined the contents of the four container vans from China that arrived at the MCT on July 12 were red and white onions instead of the declared “spring roll patti”. The cargo’s estimated market value is placed at P12 million.

On July 7, the bureau opened five container vans full of red and white onions and carrots which were declared as “autolysed yeast in powder form”. The illegal goods, also from China, were listed again under PEIP as consignee. Its worth was estimated at P15 million.

The bureau vowed that imported goods that enter the local ports without proper documentation and paid with incorrect duties and taxes will be flagged.

A Warrant of Seizure and Detention will be issued against the shipments for violation of Section 1400 of RA 10863 or the Customs Modernization and Tariff Act, Valiente said.

Manuel Barradas, Regional Manager of the Department of Agriculture’s Bureau of Plant Industry, said the confiscated goods could not be donated or given out to the public as he clarified that the only option is to destroy the products or return them to their origin, which is costly.

“We don’t know what pest and disease these might bring that would infect our other crops here in Mindanao. This would also pose human risk because we don’t know what preservatives or chemicals they used. This is a hazard to our consumers,” Barradas said.

Marietta Zamoranos, MCT sub-port collector, said the confiscated items will be subjected to seizure proceedings and after that, disposition by condemnation. “Our government does not allow the same to be disposed of by auction, so, eventually, it will be condemned,” she said.

For the Customs to act on a report that an imported shipment is in violation of Philippine laws, Valiente said they have to carefully validate any information that reaches their office to prevent any untoward consequence.

“We cannot open these container vans all at once because if we do that, it will disrupt the flow of economy and that would also hamper the operation of the port. We rely on intelligence gathering, tips that are verified and vetted by the CIIS, before taking any action,” he said.

Besides, if the BOC opens all the containers one by one, it would take so much time resulting in congestion and complaints from legitimate business owners who would be affected by it.

Valiente added there were also times that business operators would feed wrong information to the Customs to put their competitors in a bad light, like alleging that their business rivals are importing contraband.

“In such instances, we obtain legitimate complaints from a complainant, we document it so we can have a basis for us to stop the shipment from going out of the port or from going anywhere in any part of the country,” he said. (davaotoday.com)