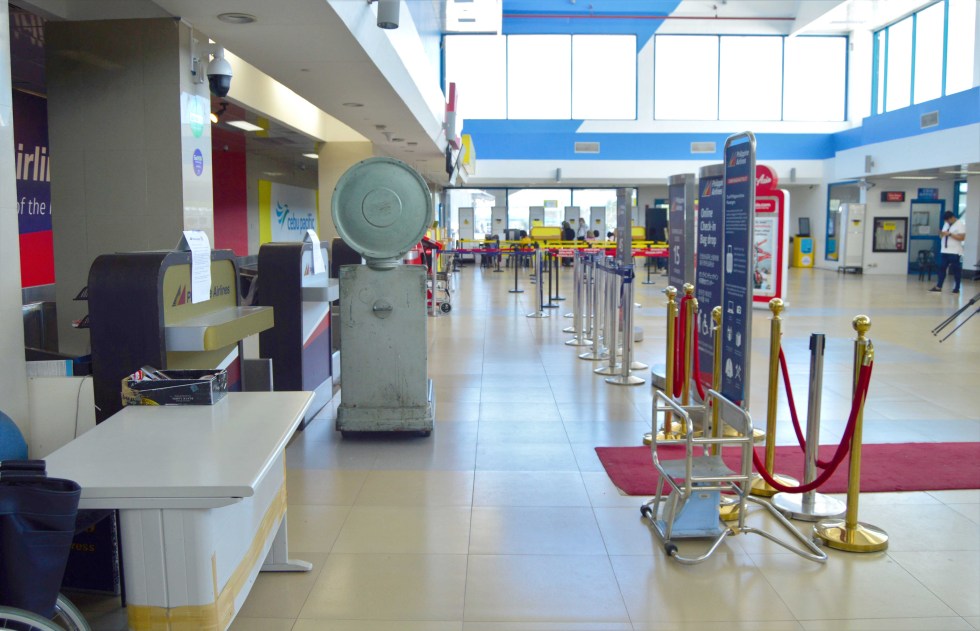 Except for a few stranded passengers, airport personnel and airline staff, the Laguindingan Airport terminal was devoid of the usual daily activities Wednesday (March 18) as the municipal government of Laguindingan has ordered the suspension of flights at said facility. (Jigger J. Jerusalem/davaotoday.com)

CAGAYAN DE ORO CITY, Philippines – Operations at the Laguindingan Airport in Laguindingan, Misamis Oriental grounded to a halt as the town’s local chief executive called on the Civil Aviation Authority of the Philippines (CAAP) to temporarily suspend all incoming and outgoing flights at the said facility starting Saturday (March 21).

The order came amid the novel coronavirus (COVID-19) pandemic that has already claimed hundreds of lives all over the world.

On March 9, President Rodrigo Duterte has declared a state of public health emergency and put the entire country under a state of national calamity for six months on Tuesday (March 17).

In Executive Order DTO-009-03-18-20 dated March 12, 2020, Laguindingan Mayor Diosdado Obsioma has mandated the suspension of passenger flights at the said airport “in connection with the imminent threat of [COVID-19].”

Exempted from the order are cargo, supply, and special flights, “to ensure the availability of the supply of food items in the markets and movement of strategic response relative to the present national emergency.”

According to Arllen Paculba, a legal consultant of Laguindingan municipal government, the mayor’s original order was for the suspension of flight to take effect Tuesday but was modified in consideration of the stranded passengers.

Paculba said the mayor is on self-quarantine in his home.

Damien Rizzelli, 23, a native of France, was with a group of four foreigners who were stranded at the Laguindingan Airport Tuesday.

Rizzelli, who was on vacation in Mindanao for three months, said he was supposed to fly out from Davao to Manila, but was forced to travel by land to Laguindingan when his flight was canceled.

“We hope to at least fly to Clark. We will just have to wait,” the French backpacker said, adding he is planning on going to Dubai, United Arab Emirates first before flying back to his country.

In her Facebook post on Wednesday, Marie Elaine Unchuan, DOT-10 regional director, said they have extended the necessary assistance to passengers stranded at Laguindingan Airport.

“We are operating full force at the DOT 10 Office and the Laguindingan Airport and online (for those are working from home) to assist stranded tourists,” Unchuan said.

In a previous interview, de Jesus said the Laguindingan Airport has an average of 6,000 passengers and 58 flights a day.

At the airport’s terminal, airport personnel and airline staff were the only people moving about, save for a few stranded passengers. (davaotoday.com)