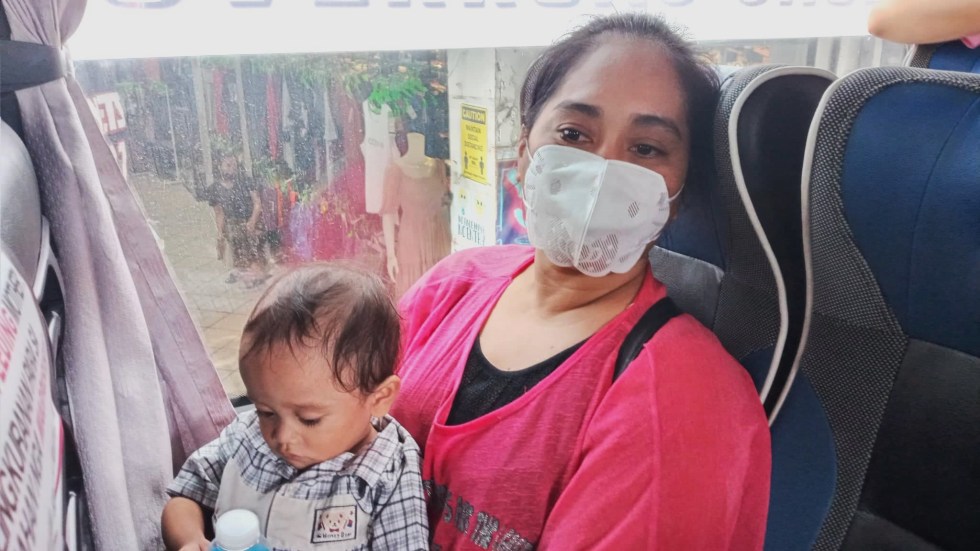 A woman with her child occupies one of the seats reserved for breastfeeding mothers during the launching of the “Designation of Seats for Breastfeeding Mothers in Public Buses in Northern Mindanao” on Aug. 1, 2022. (Jigger Jerusalem/davaotoday.com)

CAGAYAN DE ORO CITY, Philippines — The designation of seats for breastfeeding mothers in public buses in Northern Mindanao is a first in the country and could be made as a benchmark for other regions, the regional Land Transportation Franchising and Regulatory Board (LTFRB-10) has said.

“This is a very good practice that should be emulated by other LTFRB regional offices. What we have introduced here in Region 10 can be made as a benchmark,” said Aminoden Guro, LTFRB-10 Regional Director Friday, August 6.

Reserving seats for lactating mothers will protect and give them dignity inside public buses, he said, adding it “will give convenience to mothers who will breastfeed their children inside the bus.”

The idea to provide seats for breastfeeding mothers through a policy came from the Regional Development Council (RDC-10), which issued Resolution 91 in 2020. The said resolution aimed to support the Department of Health (DOH-10) regional office’s proposal to include public buses in the implementation of Republic Act 10028 or the Expanded Breastfeeding Promotion Act of 2009.

RA 10028 is a national law that encourages, protects, and supports the practice of breastfeeding.

The RDC-10 said one of the mandates of RA 10028 is the establishment of lactation stations that are accessible to breastfeeding women as may be appropriate, whether it be in health facilities or non-health establishments, including public places and public utility vehicles.

The council added that as early as 2015, the Infant and Young Child Feeding (IYCF) Task Force issued its resolution requesting all bus liners traveling intra-region to allocate an exclusive seat for breastfeeding mothers.

Guro said the DOH-10 then asked the LTFRB-10 sometime in 2019 to implement the proposal, but the COVID-19 pandemic put it on hold in 2020. On July 23, 2022, the LTFRB-10 issued a provisional order directing operators of public utility buses to reserve seats, indicated by a sticker or sign, for lactating mothers.

Should bus operators refuse to provide seats for lactating mothers, Guro said a penalty of P5,000 will be implemented for the first offense, P10,000 for the second offense, and P15,000 for the third offense. There is also a possibility of cancelation or revocation of franchise if there is a complaint on non-compliance with the said initiative.

“We can expect this to be adopted nationwide, I will have it on the agenda in our next regional management conference so all regional offices can make it as a template and hope to be implemented soon,” Guro said.

At the launching of the policy in Cagayan de Oro on August 1, the bus operators who pledged their commitment included Pabama, Bachelor Express, Bagong Lipunan, Rural Transit, Super Five, and Donsals Transport.

Meanwhile, Dr. David Mendoza, DOH-10’s local health support division chief, said the policy is one of the best achievements of the IYCF Task Force in the region.

“We know for a fact that breastfeeding is very important to a child because the mother’s milk is the cheapest, but it also has the best nutrients,” he said, adding one of the solutions that can solve the problem of malnutrition is breastfeeding.

He said the DOH has repeatedly emphasized how the first 1,000 days are crucial to a child. With breastfeeding, he added, the child’s maturity and nutrition indices go up, as well as sharpen the child’s intelligence. (davaotoday.com)