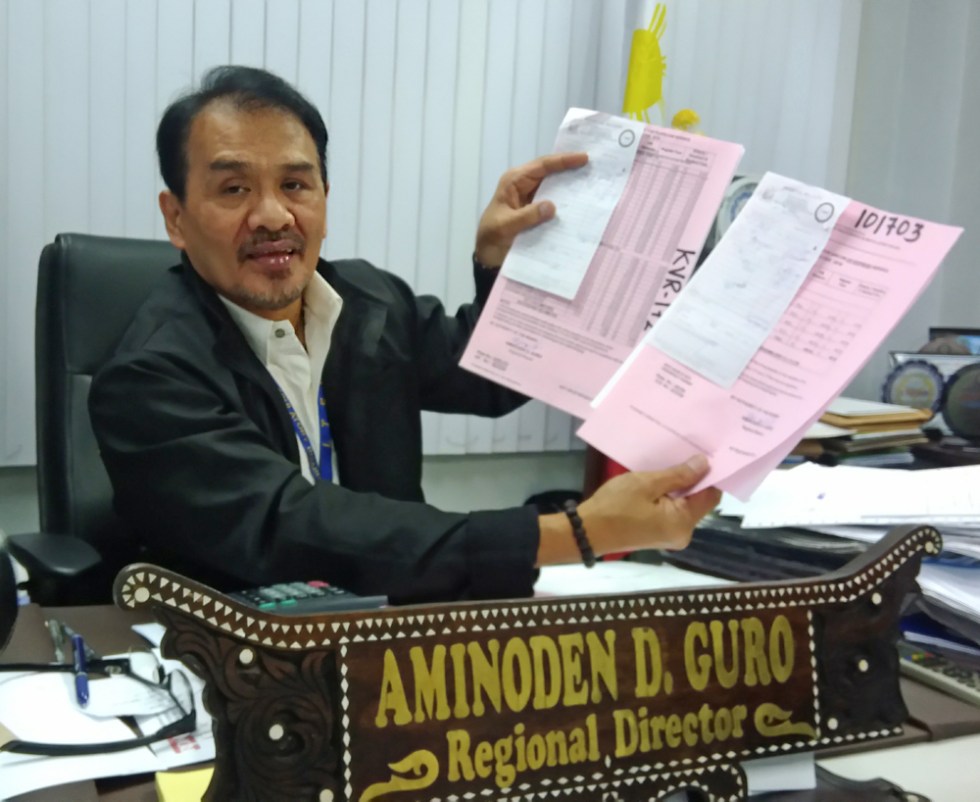 Land Transportation Franchising and Regulatory Board-10 (LTFRB-10) regional director Aminoden Guro shows to media copies of fare matrices, which is a basic requirement for PUJ drivers and operators. Those who have lost their fare matrix must request the LTFRB for a copy or face a corresponding penalty for failing to display it on their PUJs. (Jigger J. Jerusalem/davaotoday.com)

CAGAYAN DE ORO CITY, Philippines – Petitions for an increase in fare of public utility jeepney (PUJ) have not yet reached the regional office of the Land Transportation Franchising and Regulatory Board in Northern Mindanao, although the agency has assured that it will act on the request.

Three transport groups have recently said in interviews that they want the fare increase for PUJs in the region.

According to reports, the National Confederation of Transport Union (NCTU) wants the minimum fare to increase to P10 from the current minimum fare of P7, while the Solidarity of Transport Alliance in Northern Mindanao-Pinagkaisang Samahan ng mga Tsuper at Operators Nationwide (Starex-Piston) is pushing for P8 PUJ fare.

But LTFRB-10 regional director Aminoden Guro said they have yet to receive any petition from the groups.

“It would good for them to submit their respective petitions now so we can endorse them to the LTFRB central office,” Guro said, adding that all petitions for fare increase will be reviewed by the agency aside from the public hearings that will be conducted as part of the review process.

He said the fare increase that the drivers and operators are asking for must be within the allowable limit as the interest of the riding public should also be considered.

“Once there is an increase in PUJ fare, it will affect thousands of commuters. While those who will benefit from it are just few, thousands will have to bear the brunt of paying more,” Guro said.

In a previous interview, Starex-Piston secretary-general Ringo Lago said his group is also looking at the side of the riding public when they revealed the plan to ask the LTFRB for the fare hike.

Proof of this, he said, is that there are individuals who come to his office inquiring if they can apply for a franchise.

“If our drivers and operators are suffering from the fuel prices, why are there many franchise applicants? Nobody wants to apply for a franchise if they think they are losing due to prices of fuel,” Guro added.

At present, the LTFRB has not lifted the moratorium on franchise applications in Northern Mindanao. (davaotoday.com)