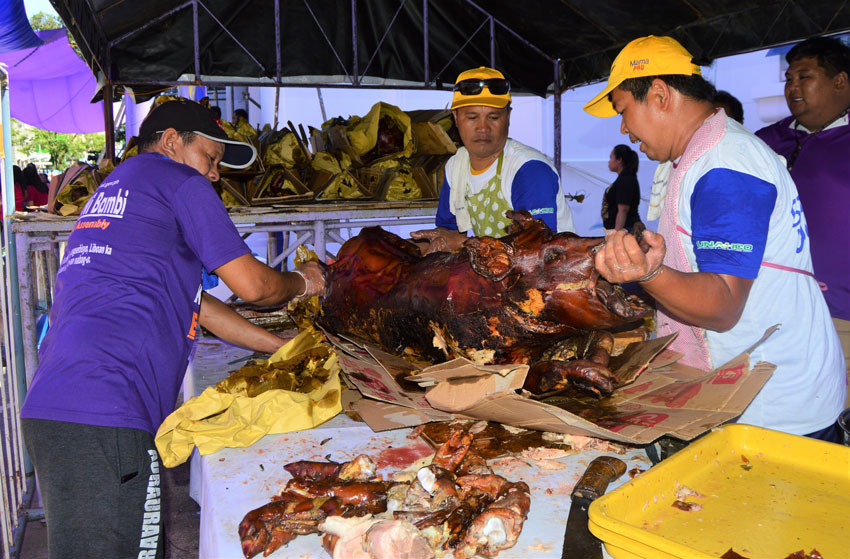 Workers chop lechon or roasted pig during the culmination of the 2019 Meat Safety Consciousness Week at the Misamis Oriental Provincial Capitol grounds on Friday. The event was to show that pigs and pork meats in the province are free from the African swine fever and are safe to eat. (Jigger J. Jerusalem/davaotoday.com)

This after the ASF struck parts of Luzon, leading to the destruction of thousands of hogs.

To prove that Misamis Oriental is still free from ASF, the provincial government again held a “pork fest” Friday to show that pigs and pork meat products coming from the provinces are still safe for human consumption.

A portion of the Provincial Capitol grounds was converted into a temporary banquet area as chopped “lechon” or roasted pigs and cooked and grilled pork meat were laid out on tables, boodle fight-style, and served to provincial government employees, guests and the public.

The event was conducted in time for the culmination of the 2019 Meat Safety Consciousness Week participated in by the province.

Dr. Benjamin Resma, the provincial veterinarian, said they have prepared 25 roasted pigs and 125 kilos of pork meat cooked either as “humba,” a popular local dish, or as barbecue.

“This is to show to the public that pigs and pork meat products are still safe to eat. So far we have not been affected by the African swine fever,” he said.

Resma said they are also not yet keen on lifting the ban as suggested by the Department of the Interior and Local Government anytime soon.

Besides, he added, only Gov. Yevgeny Vincente Emano can order the revocation of the executive order banning the entry of pigs and pork meat products from Luzon that he signed last month.

“It is not good to lift the ban. Imagine the millions of pesos that will be lost if ASF enters Mindanao,” Resma said.

Dr. Leo Mira, the regional veterinary quarantine officer in the region, said quarantine checkpoints in all the entry points of Northern Mindanao are still in effect.

“We are monitoring and have been strengthening our surveillance in every locality. We are keeping a close watch to ensure that ASF will not enter the region,” Mira said.

He said all the Northern Mindanao provincial chief executives, except Lanao del Norte, have already issued their respective executive orders to implement the ban.

As the region is among the highest producers of hogs and pork meat products, it is essential that its borders will be protected.

Leo Tan Jr., a member of the Northern Mindanao Hog Raisers Association, said they have been in close coordination with the local government units and their veterinary offices in informing the consumers that the ASF has not yet penetrated the island.

In fact, Tan said their group has donated the roasted pigs and cooked pork meats which were served to the public Friday.

The focus of the association’s information and education campaign is focused reminding backyard hog growers to avoid feeding their livestock swill or food leftovers, or to boil it for at least an hour, he said.

Tan added that it is important that the backyard hog growers observe this safe practice as feeding swill is on the causes of the spread of ASF.

He said they have also met with hog raisers from the Visayas for a joint cooperation on the conduct of the information campaign.

Julito Ogsimer, the village chairman of Lapasan and an owner of a lechon business, said orders of roasted pig has declined since report of the ASF came some weeks back.

Before the ASF scare, Ogsimer said orders for lechon can reach as high as 250 a day, but now it has gone to 50.

“The ASF has really affected my lechon business. I hope the government will do something to solve this problem,” he added. (davaotoday.com)