Mis. Or. not infected with ASF yet but officials not taking chances 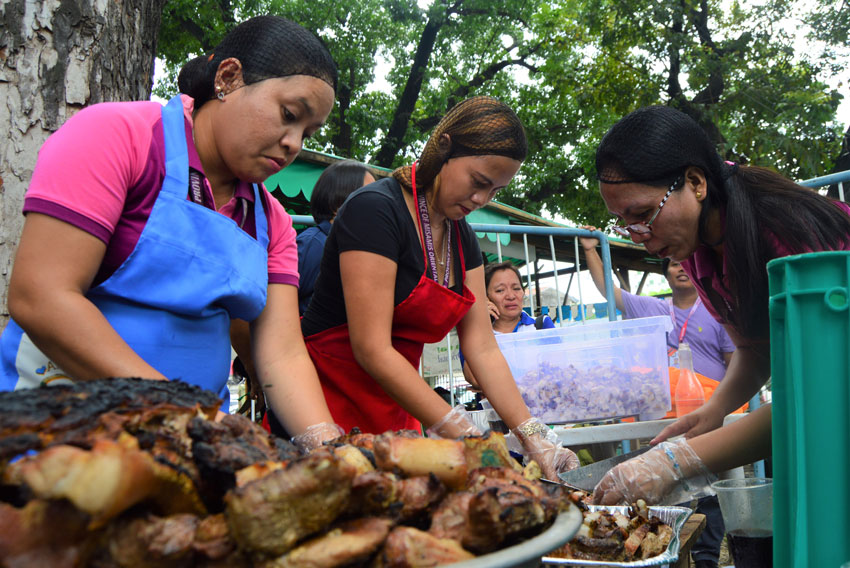 Misamis Oriental Provincial Capitol employees slice the pieces of grilled pork during the weekly farmers’ market at the Capitol grounds and then distributed to the public on Friday. The grilling was to show that pigs and pork products in the province are safe to eat and are free from the African Swine Fever. (Jigger J. Jerusalem/davaotoday.com)

CAGAYAN DE ORO CITY, Philippines — Northern Mindanao’s hog industry and its protection from the onslaught of the African Swine Fever (ASF) is of utmost importance, said an official of the Department of Agriculture-10 (DA-10) on Friday (Sept. 13).

“It’s important that we secure our region from the outbreak of the ASF,” said Juliet Araos, DA-10 regulatory division chief during a press conference called by the Misamis Oriental provincial government.

Araos said the spread of the deadly virus that can infect and kill swine in a matter of days can be slowed down as the country is archipelagic.

Although the ASF has not yet reached Mindanao, agriculture officials are not taking any chances as points of entry to the island are being closely monitored.

Dr. Leo Mira, officer of the Bureau of Animal Industry’s regional veterinary quarantine services, said they have stepped up their monitoring of incoming pigs and meat products and byproducts from other areas, whether local or imported.

Those most likely affected if the ASF reaches Mindanao are the hog farmers.

Robert Uy, a hog raiser in Northern Mindanao, said since they have biosecurity measures in place in their farm facilities, they are confident their livestock will not be easily infected.

Their concern, though, is the lowering of the farm gate price ofpigs. The average per-kilo for a live swine is P125 per kilo, but due to the ASF scare, they are selling these past days at P95 per kilo.

But, he said, it has not yet affected their production on a large scale.

Uy added those most vulnerable of the ASF are the backyard piggery growers who feed their swine with “swill” or food scraps.

“Commercial hog raisers feed their livestock with feeds, while our backyard counterparts with swill. We urge them to cook the swill for at least an hour before feeding to kill the bacteria,” he said.

At the weekly farmers’ market held at the Misamis Oriental Capitol grounds on Friday, about 200 kilos of pork meat were grilled and then given to the public and employees.

This, Dr. Benjamin Resma, the provincial veterinarian, said is “to prove that our pigs and pork meats are safe and are free from the African Swine Fever.”

The executive order has also activated task force that will implement the ban including inspection and coordination with other government agencies to ensure no pigs and pork products from ASF-infected areas can enter Misamis Oriental and nearby provinces. (davaotoday.com)