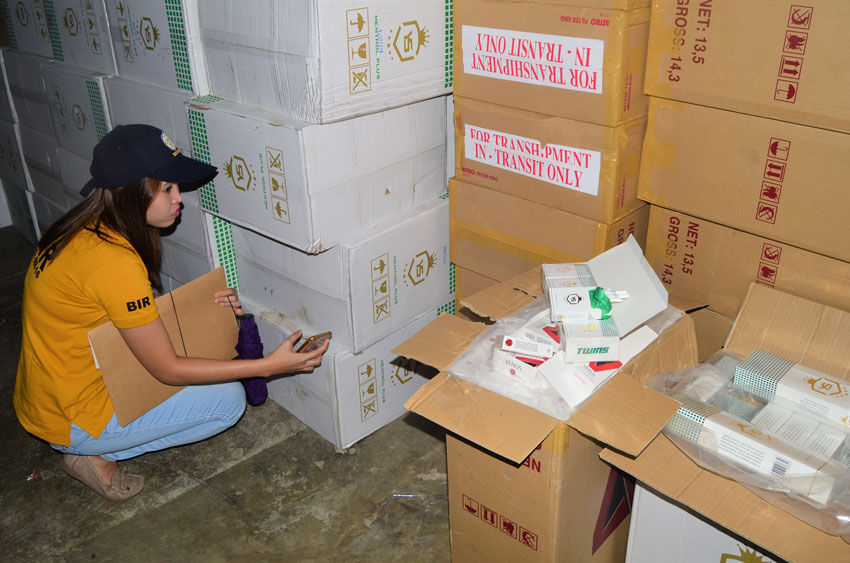 Personnel of the Bureau of Internal Revenue check the fake cigarettes confiscated by government agents following two separate raids in Barangays Cugman and Bayabas on Tuesday. The seized products were presented to the media on Wednesday. (Jigger J. Jerusalem/davaotoday.com)

CAGAYAN DE ORO CITY, Philippines — Cigarette products that are worth an estimated P882 million, and that were illegally made and without the necessary tax stamps were confiscated by a joint team of the Bureau of Internal Revenue (BIR) and the National Bureau of Investigation (NBI) Tuesday afternoon.

The 4,707 boxes of cigarettes were seized by the authorities in two separate raids in warehouses in Barangay Bayabas and Barangay Cugman in the city, according to lawyer Jonaidah Darimbang of the BIR Northern Mindanao’s legal department.

Darimbang said the raids were carried out after the BIR received a tip from an informant. She said BIR regional director Nuzar Balatero issued mission orders dated January 21 authorizing agents to raid a warehouse in Cugman, and another one in Bayabas.

Excise tax deficiency, she said, refers to the excise taxes that were not collected by the BIR due to the illegal manufacture of products such as cigarettes.

During the operation, Darimbang said the BIR was able to determine that the cigarettes are counterfeit.

“With the use of the BIR Taggant Reader, a device used to detect whether or not the BIR stamp is fake, various brands of cigarettes were found to have fake BIR stamps or no stamps at all,” she told reporters when the seized items were presented to the media in a storage facility in Bayabas on Wednesday.

Darimbang said the cigarettes were confiscated because of gross violations of the following sections of the National Internal Revenue Code as amended: Sections 236 and 258 on the unlawful pursuit of business and Sections 130 and 255, failure to file excise tax returns.

Darimbang said both the BIR and NBI have yet to identify the persons behind the illegal manufacture of the cigarettes, adding that this will be their next step as a requirement for the filing of appropriate cases.

She said the agencies still have to verify if the confiscated products are made locally or in another country.