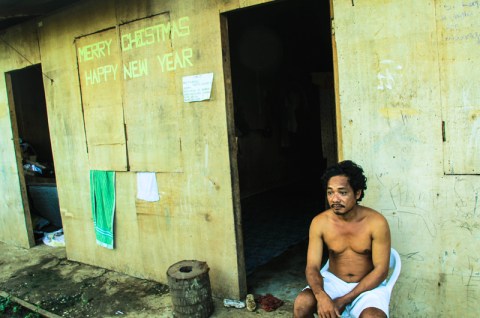 With a Christmas greeting on the wall, this resident longs for a permanent house outside of this bunkhouse built by DSWD in Baganga, Davao Oriental for Typhoon Pablo survivors. (davaotoday.com photo by Ace R. Morandante)

DAVAO CITY – For Datu Matunao, a tribal Matigsalog leader from Barangay Mangayon, municipality of Compostela, help never came from the government to repair his and other tribal houses and farms a year after Typhoon Pablo swept Davao Oriental and Compostela Valley, including their community.

“Sukad adtong pag-anhi namo, (bugas) ra to among nadawat. Walay assistance didto. Aguanta lng gyud mi, kung mag ulan aguanta gyud mi (Since the time we came here, we only received rice. There was no assistance there. We just endured it, we had to endure the rains),” Matunao told Davao Today on Wednesday.

Matunao said in the vernacular “it is better if they would be frank to us and said they had nothing to give us.”

Out of frustration, Matunao and his tribe joined in February this year an organized rally outside the regional office of the Department of Social Welfare and Development (DSWD) here asking for food and relief. Participants in the rally later forcibly entered the DSWD compound and brought out sacks of rice and cartoons of sardines, noodles and other relief goods and distributed them to the rally participants. Police threatened to file charges but did not pursue it.

Grace Korso, a resident of neighboring Monkayo town, said that only barangay officials appeared to have been favored by government relief.

She also said that relief goods and kits did not reach them, but instead were controlled by their barangay captain.

“Sakit kaayo, kanunay ra ta mabiktima. Kanunay ra magpasalig sa naa sa gobyerno karon. Ngano gisalig man sa mga official nakurakot (It hurts that we are always victimized. The government always asked to trust them. But why do they trust it to corrupt officials),” she added.

Kim Pacquiao, who lost his job in the banana plantation in Compostela after Pablo, also complained that roof materials went to local officials.

“Sila pa tong naa sa gobyerno, sila pa una nakadwat nga wala gani damage sa ilang balay. Akoa gani, nagabok na ang mga kahoy, wala pa gyud sin naabot, gisalig-saligan lang mi, (They are already with government but they got the materials ahead of us even if their houses were not destroyed. My house is already rotting yet there’s no galvanized iron roof given to us. They only promised us),” Pacquaio said.

Like Matunao he said he joined that rally to demand DSWD for equitable distribution and to check on corruption. “Panawagan namo sa DSWD angay-angayon unta lagi. Surveyhon nila mga balay kung tinuod ba naguba ba (We ask the DSWD to be fair. Let them survey the houses to see which ones were damaged),” he said.

Typhoon Pablo was the world’s damaging storm to hit in 2012. It destroyed P26 billion worth of agricultural crops and P7 billion in infrastructure, leaving 1,043 dead and 800 people missing.

Suazo said President Aquino’s promise had promised during his recent State of the Nation Address (SONA) to build 53,000 houses for Pablo survivors.

“But, many of them are still homeless. Where’s the fund? The government needs at least P10.6 billion to realize such housing projects but nothing significant happened,” asked Suazo.

Suazo also posted on his Facebook account a housing project worth P100,000 for each house, for survivors in Cateel, and said the units looked “rushed” and “substandard”.

Jobless
Aside from houses not yet built, Suazo also commented that thousands are still reeling from lack of jobs and income.

He said “10,400 displaced farmworkers in banana plantations in Compostela Valley are still jobless”, citing that plantations had either closed down or hired a few workers.

The aid agency Save the Children Foundation, which gave assistance to families, noted that “agriculture accounts for the livelihood of 80% of residents in the affected area. It said government data estimate a loss of over US$700 million in agricultural, including bananas, coconuts, rice and maize.”

One of Save the Children’s beneficiaries, Roselyn Cabatlao, 34, from Baculin, Baganga, Davao Oriental, said her family lost its only source of income from coconut farming. Cabatlao said it will take eight years for coconut trees to mature, and that means “there would be seven years of joblessness”.

The aid agency provided Cabatlao and 138,000 others a cash-for-work program that consisted of backyard vegetable garden to support their food and income.

But the agency said aid has its limits, and when this ends, so does the livelihood for survivors.

“But many are forced to end their projects as there is little to no funding available for long-term rehabilitation of livelihoods. Our worry is that these families will no longer be able to send their children to school, provide nutritious foods and a protective home environment once aid stops.”

‘Hazard areas’
Another concern of Panalidpan was that some local government units in Compostela Valley made “offer to relocate” survivors but for other purpose, including mining.

“The government will give such shelter assistance to these survivors if they accept the offer to relocate which is actually to get them out of areas targeted for open-pit mining of big companies without community opposition,” Suazo pointed out.

He warned that these operations will use open-pit operation.

“Instead of rehabilitation, government has brought military people in. Leaders are getting killed. We want justice,” said Trangia. (davaotoday.com)