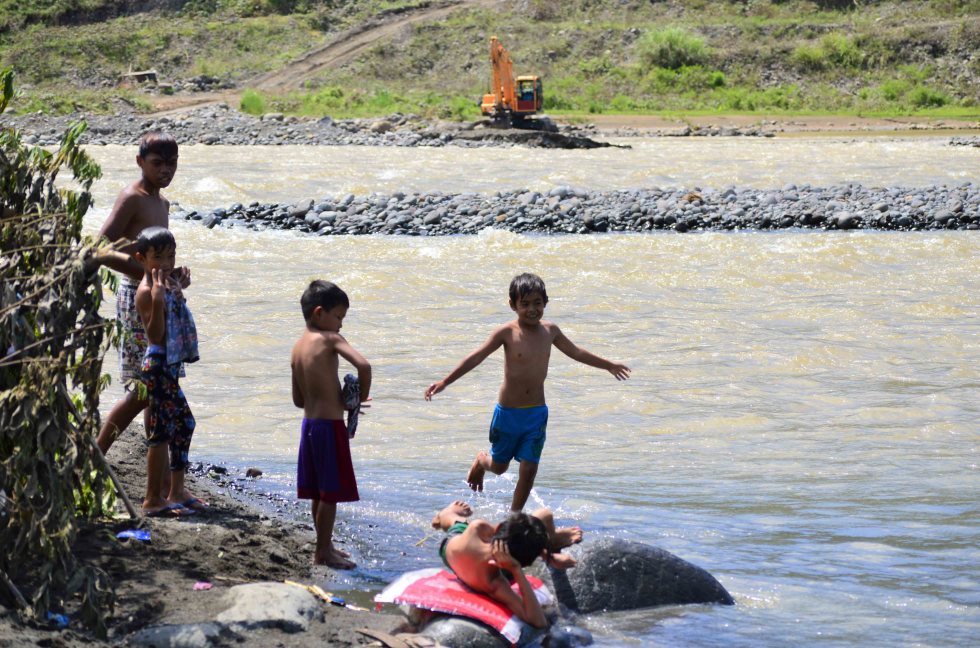 Children play on the shallow part of the river in Barangay Sta. Ana, Tagoloan town, Misamis Oriental, on Monday, February 22, as the Phividec Industrial Authority orders quarry operators within its estate to cease operation due to legal and environmental reasons. (Jigger J. Jerusalem/davaotoday.com)

PIA has claimed that these quarrying entities have been operating inside its property in Barangay Sta. Ana, Tagoloan town, Misamis Oriental without obtaining the permits from it, as well as other alleged infractions.

Established in 1974 through Presidential Decree 538, the Philippine Veterans Investment Development Corporation (Phividec) Industrial Authority is a government-owned and controlled corporation that manages the 3,000-hectare property covering 13 barangays in the municipalities of Tagoloan and Villanueva.

To date, dozens of companies and industries, including power plans and steel factories, have established their businesses inside PIA’s economic zone.

La Viña, who assumed office on September 16, 2020, said the operators are given five days starting Monday to comply with the order by removing their equipment and structures from the quarry site and vacate the area.

Ayoma said that PIA, under PD 538, has the sole authority or police power to exercise over its industrial estate.

La Viña said PIA has not granted a single operator permit to quarry.

He added that on the part of the local governments concerned, they “failed to obtain a Certificate of No Objection from [PIA] before issuing permits.”

But even if the permit issued to operators is valid, La Viña said the operators still violate the Department of Environment and Natural Resources (DENR) policy of not quarrying beyond the one-meter limit it has set.

From what PIA has found it from its documentation on the quarrying activities in the area, La Viña said the operators went beyond the one-meter mark.

“This had started in the ‘90s. It did not happen overnight, but it was not acted upon,” he said, adding that when he sat last year, one of the issues he worked on was on the quarrying within the PIA land.

La Viña said that it took him months to act on the quarrying issue as they were still gathering facts and studying these before taking any legal action.

The PIA has already lost 70 hectares of land due to extensive quarrying activities.

“The sand along the banks of the river within the [PIA] estate has been depleted due to band erosion,” said La Viña.

He said that if the quarrying operation is allowed to continue, it would cause environmental disaster that would affect the communities and companies within and near the PIA estate. (davaotoday.com)