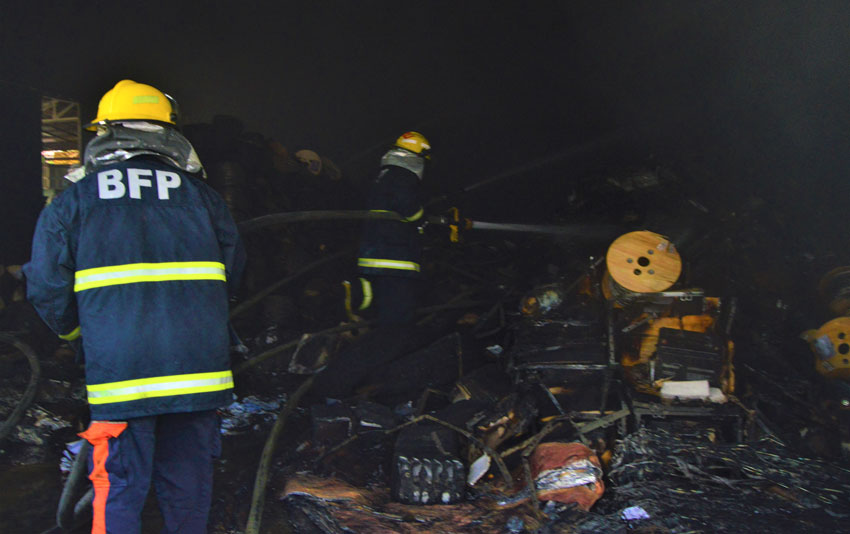 Firefighters try to put out the fire that consumed more than a hundred million pesos worth of equipment and materials inside the warehouse of PLDT-Philcom Corporation at Barangay Carmen, Cagayan de Oro, Tuesday. (Jigger J. Jerusalem/davaotoday.com)

Authorities suspected the fire may have been due to faulty electrical wiring or from the live batteries that were stocked inside the warehouse.

By 9:28 a.m., the fire was declared “under control,” although the administrator of the school next to the PLDT-Philcom facility suspended its classes due to the thick smoke, he said.

“Most of the devices and equipment that were destroyed by the fire were made of plastic materials. That’s why we are coordinating with the Bureau of Fire Protection so it can be handled the right way,” he said.

Vasallo said a portion of the company’s 20,000 subscribers in the region — about 600 of them — were affected because of the incident as electricity had to be cut off while the blaze was ongoing.

He said they were not able to use their back-up generator set as it is located near the warehouse.

But he said the PLDT main office in Manila has instructed the PLDT-Philcom management to make sure all of its workers are safe.

“Our instruction from the PLDT Manila office was to secure the employees,” Vasallo said, adding that most of the 80 PLDT-Philcom personnel were asked to go home, while a few had to remained to assist the firefighters by providing them food and refreshments.

Aside from the power outage, he said it was also difficult for the employees to function because of the smoke coming from the burning warehouse. (davaotoday.com)