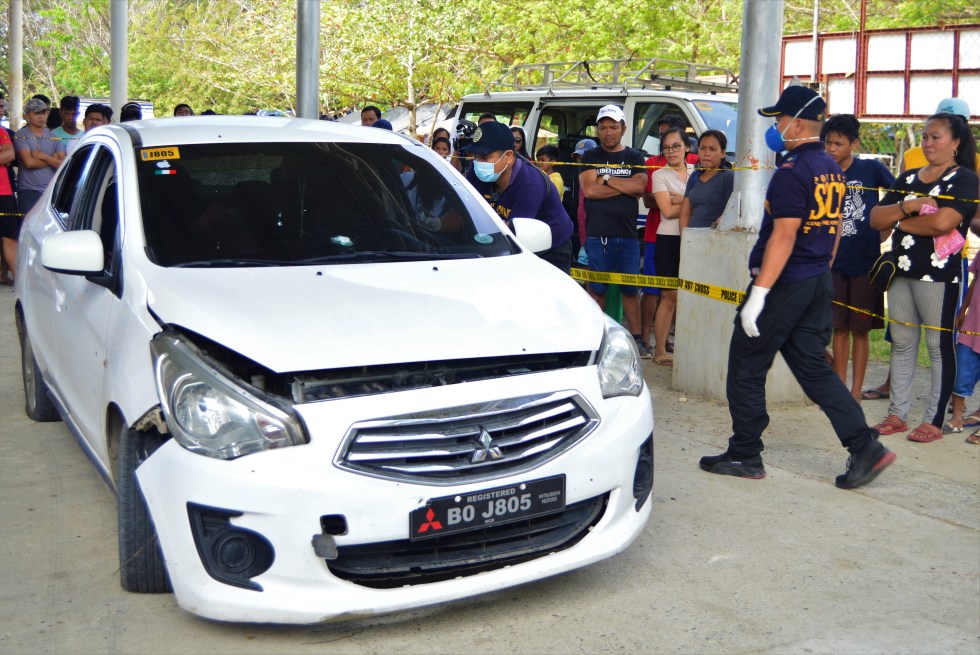 Investigators from the Scene of the Crime Operatives conduct on Tuesday a forensic examination of the vehicle used by a group of armed men who engaged police in a shootout in Libertad town, Misamis Oriental. In the shootout, a civilian and a law enforcer were killed. (Jigger J. Jerusalem/davaotoday.com)

CAGAYAN DE ORO CITY, Philippines — Authorities on Tuesday said they are investigating if a group of armed men who engaged the police in a shootout that killed two persons including a law enforcer in a Misamis Oriental town Monday night is involved in criminal activities.

“We are still determining whether [suspects are involved in] gunrunning, drug trafficking or gun for hire, due to the magnitude of the evidence that we recovered,” said Col. Roy Bahian, Misamis Oriental provincial police chief, in a press conference Tuesday morning.

Based on the police report, five men were on board a white Mitsubishi Mirage on the way to Iligan City from Cagayan de Oro when they were flagged by a group of police officers along the national highway in Barangay Poblacion, Libertad town at 8:20 in the evening.

Police said the suspects inside the car then fired at the officers conducting a checkpoint. This resulted in the death of Staff Sgt. Ronald Caayupan and wounding of Chief Master Sgt. Fernando Maestrado.

Also killed was Jephone Tinamisan, from Ozamiz City, said to be the vehicle’s driver.

Bahian said they are in possession of cellphones retrieved from the crime scene.

Following the conduct of a pursuit operation, one of the suspects was arrested after jumping off a bridge to run away from law enforcers.

The suspect, who sustained broken bones, was identified as Richard Perez. In an interview with reporters, he introduced himself as “Richard Manda,” from Lapu-Lapu City, Cebu.

The suspect said he arrived in Cagayan de Oro eight days ago after receiving a call from a friend telling him to come over.

He said they stayed at a house in Barra, Barangay Iponan, owned by a doctor whom he did not identify.

The suspect said they were on their way to Tubod, Lanao del Norte when the vehicle they were riding in was flagged in Libertad.

Richard told reporters he had no idea where the firearms came from. But he admitted that they were planning on staging a robbery. He did not elaborate.

He said he jumped off the bridge because he was afraid after hearing the gunshots.

Lt. Col. Mardy Hortillosa, the regional police spokesperson, said pursuit operations have been launched after the three suspects who managed to escape.

He said a team from Cagayan de Oro City Police Office’s Special Weapons and Tactics was even deployed to assist in the search. (davaotoday.com)