Popcom exec: Teen pregnancy in Normin among highest in PH 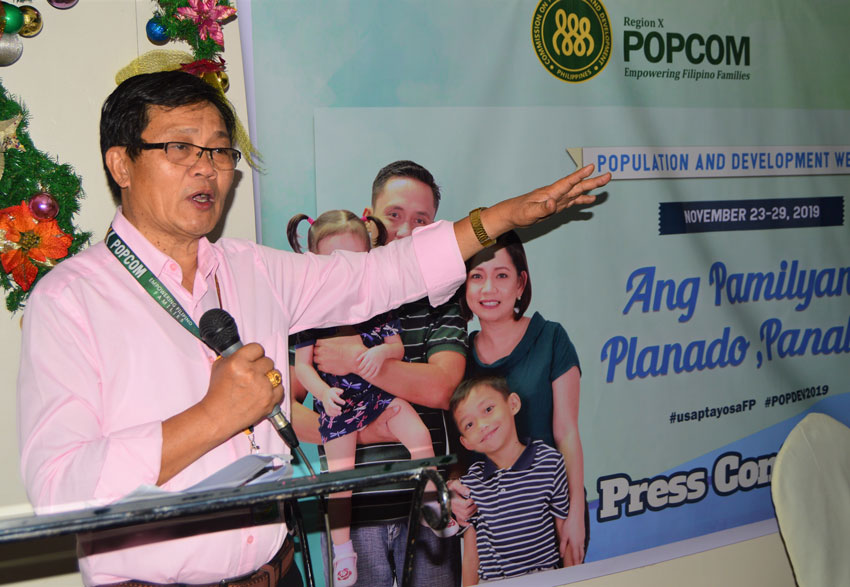 Jeremias Gupit, Commission on Population regional director for Northern Mindanao, has urged parents to pay attention to their children to prevent more incidences of teenage pregnancies, after a study found reported that teenage pregnancy in the region is among the highest in the country. (Jigger J. Jerusalem/davaotoday.com)

CAGAYAN DE ORO CITY, Philippines — Northern Mindanao has ranked second as having the most number of teenage pregnancies among the regions in the country, a Commission on Population-10 (Popcom-10) official said Tuesday.

Quoting the findings of a study conducted by the University of the Philippine Population Institute (UPPI) on adolescents and youth in Region 10 in 2015, Jeremias Gupit, Popcom-10 regional director, said Northern Mindanao now stands as the one of the areas in the country with very high prevalence of teenage pregnancies.

“This is again confirmed by 2017 National Demographic and Health Survey (NDHS) which said that Region 10 is second highest in teenage pregnancy in the Philippines next to Davao Region,” Gupit said.

In 2018, the region’s population was estimated at 4.9 million, with 20 percent of that — or close to a million — in their teenage years, said Gupit.

Gupit said that for instance, from January to mid-June this year, there were more than 3,000 babies delivered by teenage mothers, or an average of 24 births per day.

The spike in the number of adolescent pregnancies, Gupit said, can be attributed to the parents’ lack of supervision over their children with electronic gadgets such as cellphones and tablets becoming the youth’s constant companion.

Because of this, today’s young people are exposed to online pornographic materials that they can easily access through their electronic devices, he said.

“The rise of teenage pregnancies is due to the failure of the parents to pay attention to their children,” Gupit told reporters during a press conference in line with the Population and Development Week 2019 held here Tuesday afternoon.

He added that by replacing their personal presence with gadgets, parents are no longer able to monitor their kids. This leads them to experiment with sex, among other things.

In the UPPI study, it was found out that two in five youths in the region have had sexual experience, and one in three of them view pornographic materials.

For example, 4.5 percent of teenagers have engaged in sex with someone they met online or through text message, which is higher than the national figure of 3.7 percent.

Nine out of 10 of Northern Mindanao’s youths’ first premarital sexual experiences were unprotected against pregnancy and sexually transmitted infections, the study said.

A Department of Health-10 data also indicated that the total fertility rate in the region remains high at 2.7 in 2017, which still higher than the anticipated replacement fertility level of 2.1.

A replacement fertility level is the level of fertility at which a population exactly replaces itself from one generation to the next.

To address this trend, Gupit challenged parents to develop closeness especially with their adolescent children and provide the attention that no electronic gadget can give. (davaotoday.com)